Speaking to LBC’s Nick Ferrari, Sir Mike explained the frustration that many in the aviation industry were feeling as Portugal, one of the only viable holiday destinations on the UK’s green list, was moved to the amber list.

“Obviously this comes as a huge surprise, it was unexpected,” said Sir Mike.

“The expectation was that now that we had a vaccine, a serious vaccine programme, we have a very good testing programme, many protocols are in place, that we’d now have a kind of coherent and predictable policy for travel.”

“It isn’t just about tourism, it’s about business, it’s about the economy, it’s about the supply chains, it’s around the need for people in this country to get out and export and create new markets post-Brexit.”

Whilst he admitted the decisions needing to be made were “difficult”, he questioned the real motives behind the move.

“There was a hope that there was more science and data coming into this,” he said.

“And of course the frustration is many people feel that it is perhaps inevitably a mixture of data, science and politics. And sometimes it’s not clear the real reasons for the decisions that are made, at the last minute as in this case.”

He said that greater transparency from the government about the reasons for decisions may make the public more accepting.

“There is a desire to get the 21 June really working on the opening up here in the UK, and if that does have implications on travel – in order to ensure that – I think it would just be better to say that to people so they understood it.”

Portugal was put on the green list for travel nearly a month ago, but cases there have been rising steadily ever since.

There are also concerns about the presence of a new variant in Portugal first seen in Nepal, although the World Health Organisation has said it is not aware of this new strain.

The switch from green to amber has caused chaos, with holidaymakers desperate to return to the UK before mandatory quarantine and the need for expensive coronavirus tests. 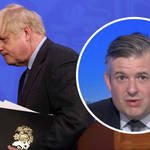 'It's not on': Starmer condemns G7 BBQ after leaders gather in group of 'around 40'