Nick Ferrari spoke to Helen Whateley about the new gambling rules on credit cards but asked why the Government baulked at an opportunity to ban sponsored football shirts.

Nick Ferrari spoke to Helen Whately, the gambling minister, about the decision to ensure that betting firms are banned from allowing people to use credit cards for gambling.

Nick asked Whately: "One thing that does appear to be ruled out, there was a thought that you and your colleagues might move to the number of football teams that have betting companies, betting logos on their shirts.

"They're shirt sponsors. You didn't take action on that. Why not?"

Whately replied: "I think, and I work with the Sports Minister on this kind of area, we've been really clear that football authorities have a very important responsibility to make sure that fans are protected from the risks of gambling addiction.

"I think the football authorities are taking these responsibilities seriously and have taken steps for instance like banning the promotion of gambling, whistle to whistle, during football matches.

"So this is absolutely about making sure you get the balance right there and we don't want to have people feeling forced to bet when they're trying to enjoy sport."

Nick asked: "You'll be aware how many teams in the Championship have shirt sponsors with betting firms, are you?"

She replied: "So I'm aware of this but, absolutely, these are the sorts of things that I said we're looking at gambling, there's going to be a review of the Gambling Act."

Nick pushed further: "Do you know of the 24 teams, how many have betting logos on their shirts, minister?"

She understood it was about 2/3.

Nick Ferrari said: "17 of the 24 championship teams have a betting firm on as their shirt sponsor.

"That obviously tells you this is very lucrative. You've moved into, you and your colleagues have moved into the area of credit cards, why did you baulk at the idea of saying that those deals must stop in the future?"

Whateley replied: "What my role is, as Gambling Minister, is to look at the evidence of what we can do to make sure that gambling isn't harmful.

"We're taking this really, really decisive and important step delivering a manifesto commitment, very specifically, on banning gambling with credit cards because that is something that we know is harmful."

She added: "That is a sort of approach that we should be taking on this following the evidence to make sure that people can be be free to enjoy and spend their money as they like but while stepping into intervene when we can see something is actively harmful." 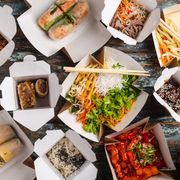 UK food poisoning cases double as takeaways, eating out and lettuce are blamed

Callers' heated clash over whether women-only spaces are transphobic