Met Police Commissioner Cressida Dick says the escalating tensions between Iran and the US are "a worrying time".

Iran fired more than a dozen ballistic missiles at coalition airbases overnight in revenge for the killing of their top general Qassem Soleimani by a US airstrike in Baghdad.

That has increased fears that Iran may choose to target the UK as one of American's allies.

The Commissioner confirmed they are constantly reviewing the threat, but insists that so far there has been absolutely no impact on the UK.

She said: "Neil Basu, the assistant commissioner in charge of terrorism, has been engaged since the first moment and has been working with government colleagues.

"It's a very worrying time, clearly. We have lots of people of Iranian or Iraqi heritage in London and the surrounding areas. There's lots for us to think about and lots of us to be alert to.

"But so far in London, we have had no issues directly associated with this. There was one quite small protest.

"But of course we are extremely alert to what this could possibly lead to, but it's a very complex situation and at the moment there is absolutely no impact."

Watch her full comments at the top of the page.

Coronavirus: How to keep your husband happy in lockdown posters condemned 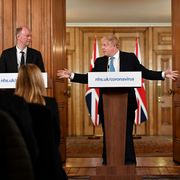