Nick Ferrari Asks Tory MP: Are You A Brexit Mutineer?

The Daily Telegraph's controversial front page today pictures the 15 Conservative MPs that they say are trying to derail Brexit. Nick asked one of them: Are you a Brexit Mutineer?

Bob Neill, the MP for Bromley and Chislehurst, is one of the Tory MPs named and he dismissed the front page as "ridiculous".

When Nick asked if he was trying to prevent Brexit, Mr Neill said: "Absolutely not. If I wanted to do that, I would not have supported Article 50.

"The headline in the Telegraph is frankly so stupid because it doesn't recognise that all of my colleagues and I accept Brexit. But we want a proper Brexit, one that works for jobs and industry, that's what we're trying to get."

Nick then put the words of fellow Tory MP Bernard Jenkin, who said that anyone who votes against enshrining the date of Brexit in law must answer allegations that they want to stop Brexit.

But Mr Neill insisted: "I'm afraid he's absolutely wrong and I suspect he knows it. 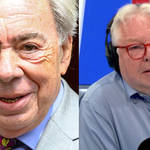