An Oxford student with aspirations to become a heart surgeon has been spared jail time after she admitted to stabbing her boyfriend.

Lavinia Woodward launched a sustained attack on her boyfriend, who she met on Tinder, in which she smashed his laptop, threw a jam jar at him and cut his leg and fingers with a bread knife.

She became angry when he Skyped her mum after he realised she had been drinking - the court heard Woodward had become addicted to drugs while in an abusive relationship with a previous boyfriend.

At an earlier hearing Judge Ian Pringle QC said he believed a custodial sentence would damage her career.

Nick Ferrari said the case was startling evidence of "one law for the rich and another law for the poor."

Watch the whole take down above.

Iain Dale addresses male rape and sexual assault: "This goes on more than you think"

Coronavirus: 'I'm sad or down most days' - the devastating impact of lockdown on mental health 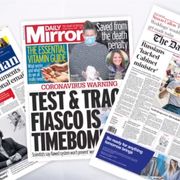