Matt Hancock has told LBC the next Prime Minister can't pursue a no-deal Brexit because the House of Commons would block it.

Boris Johnson and Dominic Raab are among the Conservative Party leadership candidates who have said they will ensure the UK leaves the EU with or without a deal on 31st October.

But Mr Hancock insists a no-deal Brexit is simply not an option for any candidate.

Speaking to Nick Ferrari, the Health Secretary said: "I simply don't think that it is a policy choice that is available to the next Prime Minister.

"I don't think that the House of Commons will allow a no-deal Brexit. They have already shown that they would block it once before in the run-up to the 29th March.

"I wanted us to leave the EU on the 29th March. I had done the work in the Health Service to prepare for a no-deal exit. But the House of Commons blocked a no-deal exit.

"We can't have a General Election before we've delivered Brexit - I'm with Brenda from Bristol.

"We've got to get a deal through the House of Commons. The most important thing is to deliver Brexit.

"Simply saying you are going to go for a no-deal Brexit is just not credible as a policy option. It's not going to be available no matter who is Prime Minister." 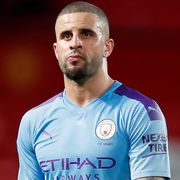