Diane Abbott's car crash interview with LBC caused waves of both hilarity and agony as people listened to it.

During the interview, the Shadow Home Secretary struggled to come up with a final cost for Labour's policy to put 10,000 more police officers on the street - at one time, claiming that each one would cost £30 per year.

CCHQ: 'Agent Abbott, rein it in. We don't want to arouse suspicions.'

People say spending would be out of control under Corbyn, but Diane Abbott is offering to pay police officers less than 2p an hour

'Where's Diane Abbott? I'm not working for £30 a year!' pic.twitter.com/Q4tNSDd5mN

There's no need for any Conservative party election broadcasts - they can just replay Diane Abbott's LBC interview in every PEB slot.

You can watch the interview they are all talking about below... 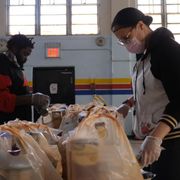 Coronavirus: Food banks set up around New York after millions register as unemployed

Coronavirus: Boris Johnson moved out of intensive care but remains in hospital