Sadiq Khan pays tribute to former independent London Mayor candidate Rory Stewart after he pulled out of the race.

Rory Stewart has said he cannot ask campaign volunteers to work for another year after the London Mayoral elections which should have taken place today have been postponed until 2021.

Shelagh Fogarty asked London Mayor Sadiq Khan how he would have been preparing for the election were there no pandemic.

"I'm somebody who thrives and loves campaigning so the last few weeks I would have spent out on the campaign trail, meeting Londoners, listening to Londoners, explaining why I've earnt their trust to lend me their votes again," he said.

Mr Khan called it "absolutely right" that the elections have been postponed while people are losing their lives due to the outbreak.

He said qhile the electoral rhythm has been "thrown off course a bit" by this decision, "in the grand scheme of things me being inconvenienced for a year is the least of the challenges I'm concerned about."

"I do wish Rory Stewart the best of luck whatever he chooses to do, it's quite clear he loves London and I'm sure we've not seen the last of him," Sadiq Khan said, "I do wish him and his family all the best going forward."

Separately, the Mayor of London has unveiled a plan to "rapidly transform London’s streets to accommodate a surge in walking and cycling when lockdown restrictions are eased."

Sadiq Khan, and Transport for London (TfL) have launched the ‘London Streetspace’ programme which will "transform" the capital's roads once the coronavirus lockdown is lifted.

"We have to think about widening the pavements to have safe places for people to queue to use public transport," Sadiq Khan said.

He told LBC one of the silver lining of this awful pandemic can be to transform our city to encourage people to walk and cycle. 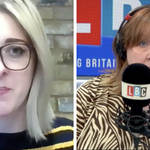 'We never walked away': Prince Harry says 'toxic' British press forced him to 'step back'