This is the moment Shelagh Fogarty pushes back against a caller who says that Boris Johnson is "a proven liar" amid allegations that he said he would rather see "bodies pile high in their thousands" than order a third lockdown.

Matt in Haringey began by accusing Boris Johnson of "directly lying to the public" in his response to Sir Keir Starmer's question about the alleged comment at Prime Minister's Questions.

Matt told Shelagh: "What he [allegedly] said was awful, but the fact that there's such an obvious cover-up and he won't answer these direct questions regardless of whether it's about the flat or if he said these words, he won't give a straight answer."

He then asked: "If he's willing to lie as he did today, what do we do from here?"

Shelagh responded by saying "these are good and trustworthy reporters saying unnamed people - multiple sources - have told me they heard him say this.

"That is a strong news report, but it isn't hard evidence, is it? That's why I'm saying you can't fully say, squarely, that Boris Johnson has just lied about that because we don't know for sure.

"You have made your judgement and you are quite within your rights to, but all I am saying is we don't know yet who paid for the flat and how, or when, and if any strings came with it, and we don't know precisely what was said in that room."

Shelagh was referring to the “bodies pile high" comment which was allegedly overheard when the PM shouted it in his study.

Having heard from Shelagh that MPs cannot be accused of being liars in the House of Commons, Matt said it was "ridiculous" that "we can't accuse the Prime Minister of lying when there's evidence to suggest he is lying".

Shelagh replied: "There's a very serious standard in the House of Commons that if you are found to have lied at that dispatch box... there are serious, serious sanctions as a result of that.

"So the 'L word' is something that cannot be thrown about lightly."

Shelagh concluded by saying that "Keir Starmer didn't quite get it right today because he gave [Boris Johnson] an out."

Speaking of Sir Keir performance, Shelagh explained: He said 'Can you tell the Commons whether you said these things?'. So Boris Johnson answered the first part of that question - no I can't tell the Commons. No thanks, I don't want to."

"He needs to ask a sharper question next time - 'did you ask this or didn't you?' is the question."

READ MORE: 'Boris Johnson is the sort of man who couldn't care less about his own integrity'

READ MORE: James O'Brien gets to the heart of claims levelled against the PM 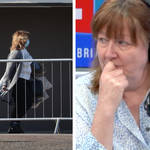