The Mayor of London claimed that players can get all their violence out on the pitch and won't want to beat someone up afterwards.

Speaking on LBC to Nick Ferrari and former England captain Laurence Dallaglio, he said that he is working with the RFU to get the sport into schols in north and east London.

He told LBC: "If you think about rugby and the incredible fun it is for kids to work off steam in that way, do you not agree it could play a major role not just in increasing academic performance, but in stopping kids getting involved in gang crime and the other stuff that also supplies adrenaline and fun and team participation, but takes them in the wrong direction.

"If you want violence, it is fantastically... you know, if you are going to spend an hour and a half getting your head kicked in more of less on the rugby pitch, you're not going to go out after that and get involved in gang crime, are you?"

Mr Dallaglio put it rather more succinctly, saying: "Rugby allows you to channel your energies in the right way." 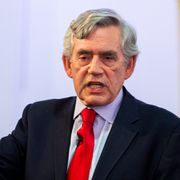