Cabbies Calling For Enquiry Into Cameron And Osborne's Dealings With Uber

Central London at a standstill, hundreds of black cabs blocking Whitehall in a protest against Uber @LBC pic.twitter.com/nXtQQCjA90

The cabbies are calling for a parliamentary inquiry into claims Cameron and Osborne lobbied for Uber @LBC pic.twitter.com/FHVITcFk8i

Streets around No.10 packed with police ready for a Black Cab demo later, around claims Cameron and Osborne lobbied for Uber @LBC pic.twitter.com/01a1zcHabx

They are urging Theresa May to launch a parliamentary enquiry into the claims.

Cheers and chants as a letter's handed in to Theresa May calling for an inquiry into the licences given to Uber and Gov involvement @LBC pic.twitter.com/O3F7cfgE9o

Earlier on in the day, LBC weekday Presenter James O'Brien quizzed the Mayor of London Sadiq about Uber, which has left the black cab trade in turmoil over recent years.

Martin, a black cab driver, phoned into the show to say that Transport Secretary Chris Grayling has said Sadiq Khan can cap the number of private hire vehicles in London.

But Sadiq said that's not the case, saying: "I can't cap it."

The claims come after George Osborne was recently appointed Editor of the Evening Standard.

James O'Brien asked the Mayor: "The future Editor of the London Evening Standard, George Osborne, is hardly likely to write a story critical of a company when he's doing one day a week with an investment fund that's got half a billion quid invested in Uber?"

Sadiq responded: "Well that's a question for George Osborne to answer as the future Editor of the Standard."

James went on: "But as the Mayor of London does it worry you that one of the most, if not the most, senior journalist in the city, that you govern, is open to accusations of being in bed with Uber? At a time when black cab drivers...are having a hell of a time?"

"Nobody can accuse my administration of being involved in a timocracy. I think there are issues in relation to the way Uber behave, and they've been expressed in all forms of the media.

"Whether it's broadcast, whether it's the print media. You saw the articles in the Daily Mail. I'm quite clear. I think we should have a two-tier system in London.

"I think there is a place for black taxis and a place for minicabs. I want the highest quality minicabs operating in London. I want the government to give me more powers so I can address Martin's frustrations.

"But I'm not going to pretend I've got powers that I haven't, and if government ministers are misleading members of the public, or black cab drivers like Martin, it's really important that I set them straight." 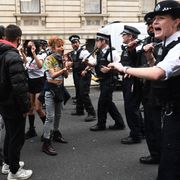 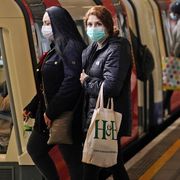