President Trump declared the US is "terminating" its relationship with the World Health Organisation over its handling of the coronavirus pandemic.

In a speech at the White House, the President claimed China has total control over the WHO and “pressured them to mislead the world” over Covid-19.

He said the WHO money would instead go to “other worldwide and deserving urgent global public health needs.”

His comments came during a Rose Garden speech on the US' relationship with China, in which he also said China had "continually violated its promises to us and so many other nations."

The President said China's "cover-up of the Wuhan virus has allowed the disease to spread all over the world, instigating a global pandemic."

He also said the US will begin the process of withdrawing special trade benefits for Hong Kong because of the Chinese government's imposition of a new security law in the semi-autonomous city.

Mr Trump suspended funding of the organisation on April 14, accusing them of “severely mismanaging and covering up” the coronavirus outbreak.

The US was the WHO’s top donor, with around $400 million of funding each year.

President Trump said: “We have detailed the reforms that it must make and engaged with them directly, but they have refused to act.

“Because they have failed to make the requested and greatly needed reforms, we will be today terminating our relationship with the World Health Organisation and redirecting those funds to other worldwide and deserving urgent global public health needs.

“The world needs answers from China on the virus. We must have transparency.

“Why is it that China shut off infected people from Wuhan to all other parts of China?

President Trump is suspending Hong Kong's special trade status with the United States. It follows anger at Beijing's decision to impose a new security law on Hong Kong that US officials say erodes its freedom and autonomy. @nickharperfsn reports from Washington. pic.twitter.com/SdgiZyIpra

During the wide-ranging speech, the President discussed the history of China's relationship with the US under previous administrations and claimed they had caused the US to lose "hundreds of billions of dollars a year."

He began the speech by saying: "China’s pattern of misconduct is well known – for decades they have ripped off the United States like no-one has ever done before.

“Hundreds of billions of dollars a year were lost dealing with China, especially over the years during the prior administration.

“China raided our factories, offshored our jobs, gutted our industries, stole our intellectual property and violated their commitments under the World Trade Organisation.

“To make matters worse, they are considered a developing nation, getting all sorts of benefits that others including the United States are not entitled to.

He continued: "But unlike those who came before, my administration negotiated and fought for what was right. It's called fair and reciprocal treatment.

"And they broke their word to the world on ensuring the autonomy of Hong Kong."

Mr Trump said the US is to sanction Chinese officials responsible for eroding the territory's autonomy, and the US will begin the process of withdrawing special trade benefits for Hong Kong because of the Chinese government's imposition of a new security law in the semi-autonomous city.

Tensions over Hong Kong have been increasing for more than a year as China has cracked down on protesters and sought to exert more control over the former British territory.

President Trump said the administration would begin eliminating the "full range" of agreements that had given Hong Kong a relationship with the US that mainland China lacked, including on trade and extradition.

He said the State Department would begin warning US citizens of the threat of surveillance and arrest when visiting the city.

The president also said the US would be suspending entry of certain Chinese citizens.

He did not provide specifics, but officials said this week that the administration was considering expelling thousands of Chinese graduate students enrolled at US universities. 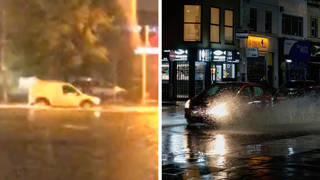