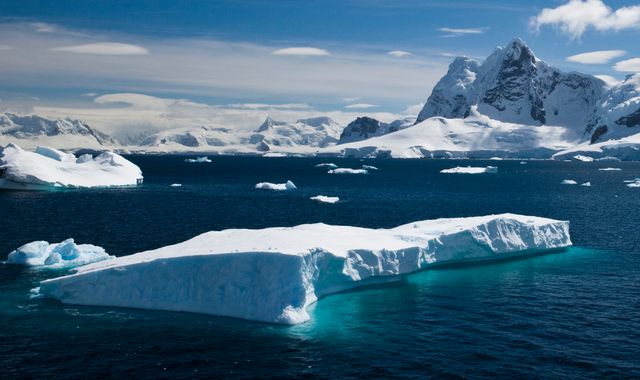 Antarctica faces a growing threat from fishing and mining as its ice melts and the world's population swells, an expert has warned.

"If you're not careful, the ice is slippery," he said in an interview with Sky News to mark the 200th anniversary of the discovery of the continent.

"If Antarctica continues to change thanks to things like climate change, will that also lead to a shift in the way that we think of Antarctica? Does Antarctica stop being so exceptional?"

He said seals and whales have been heavily exploited in the past, but increasingly fish and, in future, minerals, such as zinc, iron and uranium, could be targets.

Mining is currently banned under the Antarctic Treaty and fishing is regulated.

But the 60-year-old agreement, widely seen as a fudge to smooth over competing territorial claims, is under pressure as emerging nations, particularly China, seek to establish a presence on the continent.

"Whatever we do in the Antarctic, however well governed it is or environmentally protected, climate change is going to place pressures on the Antarctic," said Professor Dodds.

"It means that countries like China are going to become increasingly dominant in demanding a voice about how Antarctica is governed. After all, cities like Shanghai will bear the brunt of sea level rise."

China has four research stations on the continent and is building a fifth.

The Antarctic Treaty was signed at the height of the Cold War. It put aside territorial claims made by the UK, France, Norway, Argentina, Chile, Australia and New Zealand, and designated the continent as a place of "peace and science".

It survives on consensus. There are 54 nations signed up, including all the superpowers.

But there are doubts whether it could hold if one nation broke away and ignored the agreement.

The treaty has led to a boom in science on Antarctica, with 30 countries establishing a total of 82 research bases dotted around the continent.

But there are tensions over the military presence at some bases and lack of high-quality science at others.

Chile and Argentina, which have both made territorial claims that overlap with the UK's, have sent pregnant women to their bases to give birth.

"Science has always been a proxy for geopolitics," said Professor Dodds.

"Countries went to great lengths to put their stations all over Antarctica and to raise national flags and to show off their activities in a really direct attempt to say, 'we're here, we're busy, this is ours.'"

"People assumed in the 1950s that Antarctica would be isolated from the rest of the world, that it would be a sort of natural laboratory for science and good governance.

"Actually, as we go into the 2020s we're going to see that Antarctica is ever more exposed to these broader geopolitical, economic and cultural currents that make it hard to continue with the old business model."

Jane Rumble, head of the polar regions department at the UK Foreign Office, said science is absolutely critical for Antarctica and the treaty.

"We're not complacent or naive that the treaty is the best thing ever," she told Sky News.

"But the evidence shows that most states feel that they're better off cooperating within the treaty to understand Antarctica and have a say in how it's governed than trying to go alone."

The first recorded sighting of Antarctica was on 27 Jan 1820 by Russian naval officer Fabian Gottlieb von Bellingshausen. He spotted an ice shelf on the Princess Martha coast.

Ms Rumble said: "Two hundred years ago we didn't know there was a continent at the bottom of the ocean.