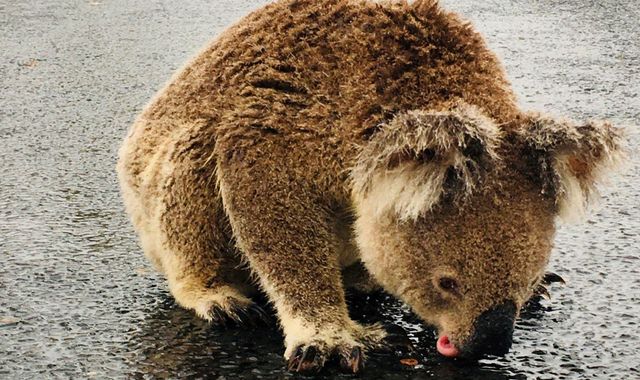 After devastating bushfires across Australia the country is now facing a new threat - flooding.

Heavy rain and thunderstorms have hit parts of Australia's East coast - but downpours have brought relief and concern in equal measure.

While they have put out some of the fires that have burning for months, they have also left the area vulnerable to flooding.

New South Wales and the Australian Capital Territory are both on flood watch, and flood warnings are in place for the Orara and Bellinger rivers on the north coast.

Severe thunderstorm warnings are in place in across parts of Queensland and the Northern Territory, with the Bureau of Meteorology warning of damaging wind and heavy rainfall.

A strong wind warning has been issued for the Byron, Illawarra and Batemans Coast regions.

Queensland Fire and Emergency Services have warned people not to attempt to get through the flood waters and to stay inside if at all possible.

They have also said people should avoid using the telephone during a thunderstorm.

Rain in the states of Victoria, New South Wales and Queensland have left some areas underwater and caused power cuts.

Up to 300mm of rain fell near the Gold Coast, closing major roads and local attractions.

Some areas saw triple the monthly rainfall in just one night, according to the weather bureau.

Brisbane resident Meg Fallon said: "It's just beautiful listening to [the rain] on the roof, it's just been so long since we've had it".

Meteorologists say the rains are a one in 100 year event.

Australia's wildfires are an annual occurrence, but the 2019/20 season has been particularly severe.

More than 104,000 sq km of land has been scorched - an area bigger than South Korea.

Firefighters are still tackling around 100 fires which are still burning three months on.

The Australian Open is due to kick off in Melbourne on Monday, but organisers have said play will have to be suspended if air pollution caused by smoke exceeds dangerous levels.