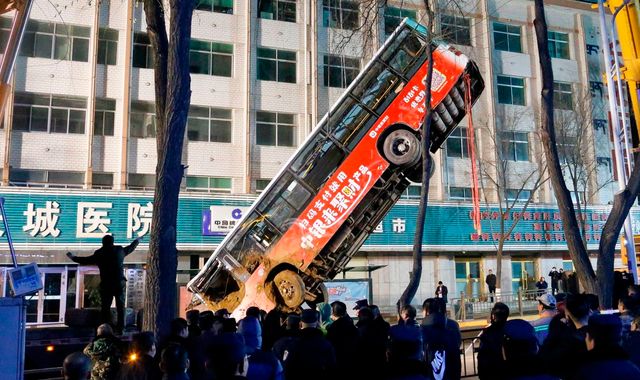 Nine people are now known to have died and one person is still missing after a massive sinkhole opened up and swallowed a bus and pedestrians in China.

Another 17 people were injured.

Pictures of the road collapse outside a hospital in the city of Xining, in Qinghai province, showed the vehicle almost entirely underground near a bus stop.

Footage posted on social media showed the vehicle gradually sinking into the hole - jutting into the air - as people scrambled for safety.

As it tipped into the chasm, there was an explosion inside the hole, the video showed.

More than 1,000 emergency workers attended the scene at about 5.30pm on Monday.

Huge crowds gathered to watch a crane eventually raise the bus from the sinkhole.

The cause of the incident is being investigated, the state-run broadcaster CCTV said.

Sinkholes are not uncommon in China.

In 2016, at least three people fell into a huge sinkhole in central Henan province, which swallowed a section of road and passersby.

And in 2013, five people died when a 10m (33ft) wide sinkhole opened up at the gates of an industrial estate in Shenzhen.