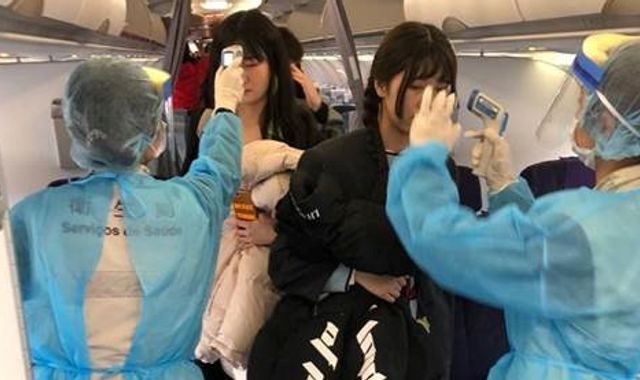 The Foreign Office has advised Britons against all but essential travel to the Chinese city of Wuhan after a new virus killed 17 and infected hundreds.

Wuhan's local transport networks, including bus, subway and ferries, was suspended as of 10am local time (0200GMT) and airport and train stations closed to outgoing passengers.

Authorities are asking citizens not to leave unless there are special circumstances, state media reported.

The World Health Organisation's boss called it an "evolving and complex situation" and said a decision on declaring an international health emergency would be made on Thursday.

Screening for signs of the virus is in place at major US airports, while Britain's transport secretary said a separate area was being set up at London Heathrow to monitor arrivals from the city.

However, one British man arriving from the city on Wednesday evening told Sky News his temperature had not been screened at Wuhan or Heathrow.

"We got a leaflet as we landed, saying if you have any symptoms please contact us. However, that was all in English, not Chinese," said Thomas Crosby.

Scoot, the budget carrier in the Singapore Airlines group, and Taiwan's China Airlines cancelled flights to Wuhan on Thursday.

More than 500 cases of the new coronavirus have so far been confirmed by Chinese authorities.

The first case in the US was identified this week, while others have been diagnosed in Thailand, South Korea, Japan, Hong Kong and Taiwan.

All of them had been to Wuhan, the Chinese city with an 11 million population where the virus is believed to have started - with illegally trafficked animals at a market being named as the likely source.

More serious cases could lead to deadly conditions such as pneumonia and kidney failure.

The Foreign Office said on its website that travellers should not visit Wuhan, capital of Hubei province, "due to the ongoing novel coronavirus outbreak".

Public Health England (PHE) has revised the coronavirus risk from "very low" to "low", and says Britain is "well prepared for new diseases".

Concerns are growing as hundreds of millions of people in China prepare to travel for the Lunar New Year holiday, which starts on Saturday.

Sales of surgical masks have increased and some people are cancelling trips and avoiding public places, as cases of the virus show up in Beijing and Shanghai.

Taiwan has joined Australia in telling its citizens to avoid Wuhan, while North Korea has banned foreign tourists, most of whom are Chinese.

Singapore is also among the countries that have started screening all passengers arriving on flights from China, with heat-detecting equipment scanning people for signs of fever.

Coronaviruses are a large family of viruses ranging from the common cold to severe diseases such as SARS, which killed nearly 800 people during the 2002-03 outbreak.

Chinese state media say the latest strain is different from those identified in the past, but have confirmed it can be passed from person to person.

All coronaviruses are also zoonotic, meaning they are transmitted between animals and people.

There are no reliable vaccines. The best someone can do is take medicines and treatments for specific symptoms.