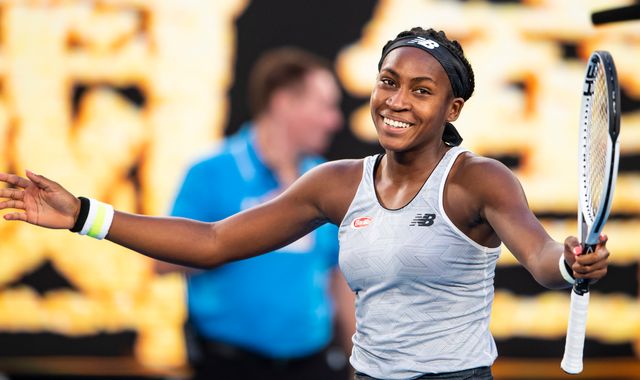 American teenager Coco Gauff has produced a performance for the ages to knock out defending Australian Open champion Naomi Osaka.

The 15-year-old has already made headlines around the world but none of her achievements so far could compare to this as she took apart one of the best players in the world at the Rod Laver Arena.

Gauff has now reached the fourth round at two grand slams as she comfortably defeated the player who lifted the trophy here 12 months ago.

The teenager kept her head impressively while Osaka lost hers, tumbling out of the tournament 6-3 6-4 in a flurry of errors.

Gauff was stunned by her achievement, saying: "Two years ago I lost first round in juniors, and now I'm here. This is crazy.

"I was just telling myself one point at a time and keep fighting because you never know what happens on this court.

"I'm on Rod Laver Arena, I can't believe this."

Gauff said she had been too shy to speak to Laver when she passed him in the corridor but hoped to set up a meeting.

Laver was quick to respond on Twitter, saying: "Hello CocoGauff - congratulations on your incredible victory tonight. I would love to meet you too."

"I love her, but I don't like this feeling of losing to her," said 22-year-old Osaka, who had easily beaten Gauff at the US Open last summer.

"I think just losing to her, that hurts more than the defending champion thing. I think it's because I have an age problem. I don't like losing to people that are younger than me. I took this very personally."

In the next round, the teenager will face another young American, 21-year-old 14th seed Sofia Kenin, who battled past Zhang Shuai 7-5 7-6 (7).

Gauff's victory on Friday came several hours after title favourite Serena Williams had been stunned by a player who won just 15 points against her in their last meeting at the US Open.

China's Wang Qiang had vowed to improve after that match and she certainly kept her promise, going toe to toe with Williams and not losing her cool when the 23-time grand-slam champion fought back.

The 38-year-old's defeat meant the wait to equal Margaret Court's record went on, but Williams added: "I definitely do believe [I can do it] or I wouldn't be on tour."