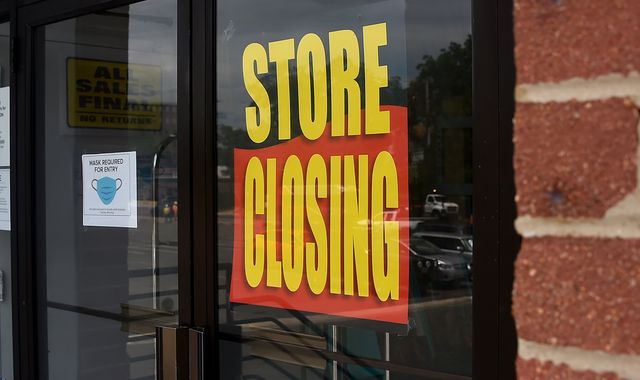 Those on Wall Street who fretted that US equity markets had rebounded too strongly and too rapidly from their March lows are finally having their moment in the sun.

Since hitting a post-crisis high on 8 June, the S&P 500 - America's broadest stock index - is down by nearly 6%, while the Dow Jones Industrial Average is down by 8% or so. Only the Nasdaq, the only major US stock index which is up on 2020 as a whole, continues to march along regardless, having hit a new all-time high only two days ago.

A combination of factors have knocked US stocks off their stride.

Firstly, there was that unease that the rally had been too strong, leaving many US equities on stretching valuations.

Secondly, the acceleration in COVID-19 outbreaks in states such as Florida, California and Arizona has raised concerns, particularly as some of these - especially the latter - appeared previously to have evaded the worst of the pandemic.

A third factor may well be some of the news now emerging from the US jobs market.

The latest jobless claims data revealed that the number of Americans signing on for unemployment benefits remains at record highs.

According to the US Department of Labor, some 1.48 million Americans registered as unemployed, a figure worse than economists had expected.

The good news is that the number is well down on some of the shocking figures of nearly seven million seen at the end of March as the US went into lockdown.

:: Listen to the The World Tomorrow on Apple podcasts, Spotify, and Spreaker

It suggests that, while the huge number of lay-offs that were seen by American employers as the pandemic began appear to have come to an end, those employers are not yet in a position to begin hiring again.

That trend is likely to continue while new COVID-19 cases crop up around the US. The spread has forced some of America's best-known employers to reconsider their reopening plans. For example, Apple has announced it is re-closing stores in a number of locations, such as Houston, Texas, that it had previously reopened. Walt Disney has put on hold plans to reopen its theme parks and resort hotels in California, which were due to reopen on 17 July, while the reopening of Walt Disney World in Florida a week earlier may also be delayed.

Jason Ader, chief executive of New York-based fund manager Springowl Asset Management, has argued for a while that markets had rallied too strongly.

He told Sky News: "As I speak to companies around the country, around the US, and the Mid West, Texas, California, the stock prices are really way, way ahead of the reality of what businesses are facing right now."

He added: "The rules that are in place for various phase two and phase three reopening are really quite constraining for businesses. There's a lot of work to do to get people back to work. There are a lot of businesses that want to start, particularly in the hospitality industry where we focus, and it's just quite sad to see.

"But I don't expect there is going to be any near-term relief - it's very clear. I spent part of the pandemic in Arizona. It was a safe spot - now it's a hotspot and things are getting worse, not better, in some of those markets that opened up too soon. It's a warning marker for all."

The concern has to be that, as corporate casualties mount, the job losses will carry on coming. The department store operator Macy's, one of America's most famous retailers, said today it was laying off 3,900 managerial employees on top of 2,000 job cuts announced in February.

Two other major US department store operators, Neiman Marcus and JC Penney, have also filed for bankruptcy protection and are expected to announce job losses. A cloud also hangs over the aviation sector, where aircraft making giant Boeing has already said it expects to lay of around one in 10 of its 160,000 employees, while United Airlines and American Airlines - two of the country's big four carriers - have also recently announced big job cuts. Another of the quartet, Delta Airlines, said today it would be adding around 1,000 flights in August but said it did not expect to add "many more" on top of that.

Elsewhere, the parent company of the popular Chuck E. Cheese restaurant chain, which has more than 600 sites across 47 US states, has filed for bankruptcy protection, having already begun closing sites on a permanent basis in locations such as Sioux City, Iowa, and Long Beach, California.

And, as the world moves into the second half of 2020, it is hard to find grounds for optimism on the jobs front.

In the US in particular, it found employers expect very modest hiring during the next three months, with employers in the leisure and hospitality sectors reporting the weakest outlook in more than a decade.

Jonas Prising, Manpower's chairman and chief executive, told Sky News: "The speed of the recovery that some may have hoped for is not manifesting itself in a rapid re-hiring of those who were furloughed.

"[Today's jobless claims] gives a strong indication of the difficulty the US labour market finds itself in right now."

One factor which does not appear to be being priced in by investors is a victory for Joe Biden, the presumptive Democrat candidate, in this November's presidential election. This is despite Mr Biden currently leading President Donald Trump in most opinion polls.

Mr Ader said: "A Biden presidency very likely will have a catastrophic implication for the stock market. The policies behind him look quite liberal and quite anti-business.

"There's a lot of things you could say about either side but the current administration has just been very good for deregulatory, pro-business environment and you see it in the stock market, in business profitability.

"In the US, it seems the lesser of two evils as it relates to our election, but we know what we're getting with the current administration... the economic conditions have been very healthy with the group that's in now."

What is less predictable is what happens if Mr Biden continues to lead Mr Trump in the run-up to the election.

(c) Sky News 2020: Coronavirus and gloomy jobs figures have brought US markets back down to earth