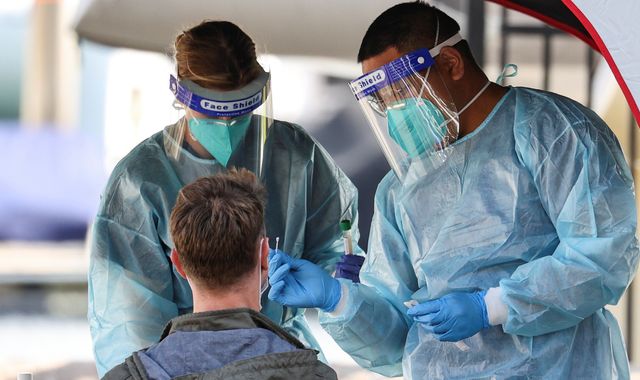 Australia has suffered its worst day of the coronavirus pandemic, with more than 700 new infections and 13 deaths from the disease recorded in Victoria, the country's second-most populous state.

The country's previous national record of new cases was 518 but a second wave of the coronavirus, centred on care homes, has seen numbers rise again.

Victorian state premier Daniel Andrews said: "I'm obviously concerned to see these numbers increase. It is not unexpected in some ways when you have got so many cases in private sector aged care."

Too many people were going to work when they were sick or while they were waiting for test results, he added.

Further restrictions are being brought in to combat the surge; Melbourne, Victoria's state capital, has already been locked down since earlier this month and other states have closed their borders.

Social distancing restrictions are to be extended, with people in the state's south no longer allowed to have visitors to their homes from Thursday.

The Federal government has sent 1,400 military personnel and five emergency teams to Melbourne to help deal with the aged care issues, including contact tracing.

Australia's Prime Minister Scott Morrison said he supports the new rules: "We've now been in this lockdown [in Melbourne] for some weeks and we are not getting the results we would hope for, and as a result the further measures that are taken are certainly necessary.

"On some days the virus wins, on other days we beat it. But I think we've got to be careful not to slip into some idea that there's some golden immunity that Australia has in relation to this virus."

The country had prided itself on rapidly containing the initial outbreak and has sill only suffered 189 deaths from among its little over 16,000 cases.

The outbreak in Victoria state has spilled into neighbouring states despite internal borders being closed.

Queensland said it had found three new cases on Thursday, two of whom were believed to have contracted coronavirus while in Sydney, the capital of New South Wales.