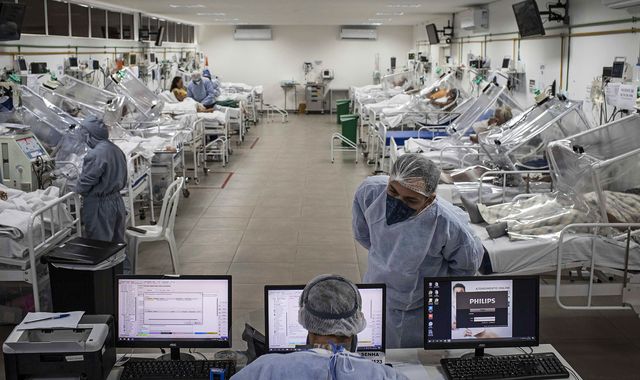 More than five million people have been infected with coronavirus globally and over 328,100 have died, according to Johns Hopkins University.

Latin America has overtaken the United States and Europe in the past week to report the largest portion of new daily COVID-19 cases.

It comes as the World Health Organisation (WHO) recorded 106,000 new cases of coronavirus on Wednesday - the most in a single day yet.

"We still have a long way to go in this pandemic," WHO director-general Tedros Adhanom Ghebreyesus told a news conference.

"We are very concerned about rising cases in low and middle income countries."

Brazil's outbreak worsened on Wednesday and the South American nation could soon have the second-highest number of cases in the world.

More than 291,000 cases have been confirmed, meaning it could soon overtake Russia.

Donald Trump has promoted treating COVID-19 with hydroxychloroquine, a variant considered less toxic and more effective than chloroquine, and he announced on Monday he was taking the drug as a precaution.

No large, rigorous studies have found either drug safe or effective for preventing or treating the virus.

Mr Bolsonaro, a conservative populist and nationalist, has long expressed admiration for Mr Trump and enthusiasm for chloroquine.

Meanwhile some countries in Europe are reporting few signs of an increase in the number of people infected after ending their lockdowns.

French health minister Olivier Veran said the number of patients arriving each day at hospitals is decreasing, along with people treated in intensive care units.

Meanwhile, China is preparing to open its National People's Congress on Friday after the meetings in Beijing were delayed for two months.

The number of fresh coronavirus cases in China has dropped recently, though clusters of infections have popped up in some areas. China reported two newly confirmed cases on Thursday.

An outbreak at the congress would be a potential public relations nightmare as President Xi Jinping showcases Beijing's apparent success in curbing the coronavirus that emerged in the central city of Wuhan late last year.