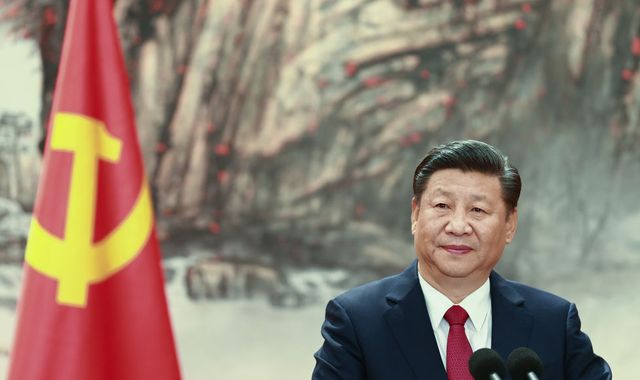 China is promising £1.64bn to help the global fight against COVID-19.

China President Xi Jinping made the pledge in a speech which is being seen by some as trying to claim the moral high ground from the World Health Organisation (WHO).

He also promised any vaccine discovered by China would be made a "global public good".

President Xi was among a number of world leaders addressing the 73rd World Health Assembly, the decision making body of the WHO. This year the meeting is being held by teleconference.

Top of the agenda was the thorny issue of how the causes and spread of the pandemic should be investigated.

More than a hundred nations expressed support for a draft resolution proposed by the EU and Australia calling for a review. China has resisted calls for an international investigation.

The virus first appeared in the Chinese city of Wuhan. It is believed to have originated in an animal species, possibly bats, before leaping the species barrier and infecting humans.

China's critics say it covered up the new virus and then denied it could pass from human-to-human until far too late.

China has also spread disinformation about the causes, claiming the US military may have brought it to China or that it might have started in Italy.

In China's defence, supporters point out it sequenced the genome of the virus early and imposed an effective lockdown, once it realised the gravity of the threat.

Xi Jinping did not refer directly to the European Australian draft resolution but voiced vague support for the idea of "supporting global research by scientists on the source and transmission routes of the virus".

Hopes of a united global response to the pandemic have been hampered by sharpening US-Chinese divisions over its cause. US president Donald Trump says he is currently not speaking to Xi Jinping.

Mr Trump is critical both of China and the WHO, and has withdrawn US funding for the global health body.

Critics say he is scapegoating China to cover for his administration's mishandling of the pandemic and is likely to continue doing so in the run up to the presidential election.