Coronavirus deaths in Italy surge by 793 in biggest daily increase - as total hits 4,825 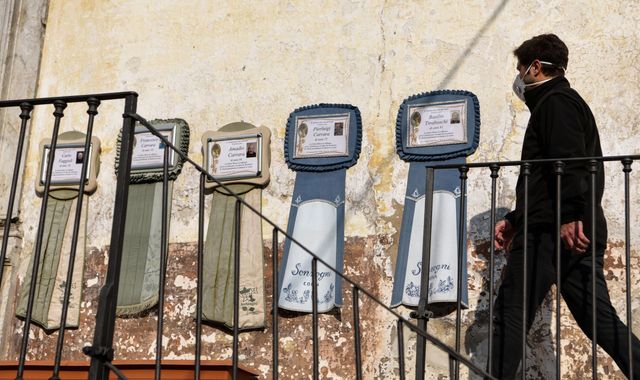 Italian officials say a further 739 coronavirus patients have died in a single day, taking the total number to 4,825.

The increase of 19.6% was by far the biggest daily rise since the outbreak emerged in the country a month ago.

Italy overtook China on Thursday as the nation to register most deaths from the highly contagious respiratory illness.

The northern region of Lombardy is the hardest hit part of the country and remains in a critical situation with 3,095 deaths and 25,515 cases.

Meanwhile in France, the health ministry announced there were a further 112 deaths from coronavirus, bringing the total in the country to 562.

There have been 14,459 confirmed cases in France, with 1,525 in a serious condition, the ministry added.

The coronavirus outbreak overwhelmed medical services in the Chinese city of Wuhan earlier this year - where the virus was first detected - and is now pushing doctors to the limit in some European countries including Italy, Spain and France.

Also known as COVID-19, the illness causes mild or moderate symptoms in most people, though severe symptoms are more likely in the elderly or those with existing health problems.

More than 89,800 people have recovered from the infection so far, most of them in China.

Italy's health minister has pleaded with citizens to abide by the rules after parks and public gardens were closed throughout the country on Saturday.

Minister Roberto Speranza said he was concerned that too many people are ignoring lockdown restrictions that were imposed nearly two weeks ago in an attempt to slow down the spread of the virus.

He called for a "great alliance between citizens and institutions, saying, "what counts more is the behaviour of every individual".

Earlier this week, soldiers were drafted in to help enforce a lockdown following the announcement of the new deaths.

Giuseppe Sala, the mayor of Milan, the capital of Lombardy, attempted to rally Milan's 1.4 million citizens, tweeting: "By now, we have understood, this is a marathon, not a sprint."

Currently, people can go to work, food shop or exercise near their homes.

With around 23% of people aged over 65, Italy has the oldest population in the world after Japan.

Medical experts say these demographics could explain why the number of dead in Italy is so much higher than the rest of the world.

The national health institute (ISS) said the average age of those who died was 78.5 years, with the youngest victim 31 and the oldest 103 in its most complete analysis of the outbreak - which is yet to be published.