Coronavirus: Nearly half the world's population now under restrictions 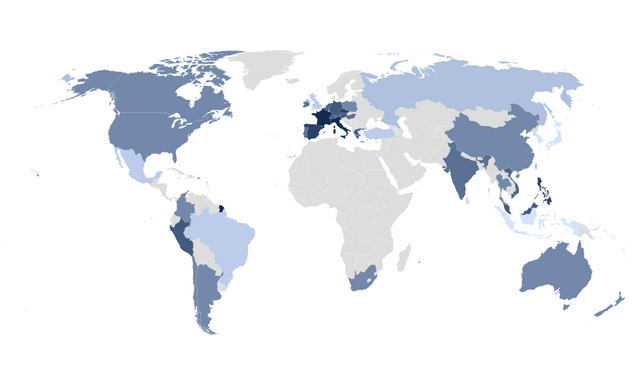 Nearly half the world’s population is under some form restriction as governments move to stop the spread of coronavirus, Sky News analysis has revealed.

At least three billion people across 41 countries face some form of restriction, such as being urged to work from home, with more than 1.5 billion under stringent lockdown.

Large parts of Western Europe are currently under lockdown, with the UK one of the latest countries to ask its citizens to stay at home, with penalties imposed on those seen in large gatherings.

Sky News analysis, based on data from the Swiss investment bank UBS, graded the restrictions based on intensity - from school closures at the lower-end to lack of freedom of movement at the severe-end, like much of China during February.

China has since relaxed restrictions on movement as the number of people dying from coronavirus has fallen sharply.

According to its national health commission, the vast majority of China's cases have been in people coming into the country rather than from community spread.

Similarly, Japan's education ministry has said it will not renew restrictions on schools from April despite warnings from world health authorities.

UBS say that 27 out of 41 countries being monitored by tem now have 'severe' mobility restrictions in place.

At least 37 countries have schools closed until the end of March, with many governments giving local authorities powers to keep schools closed indefinitely.

Data from most countries show restrictions of social gatherings to varying degrees.

Police in the UK have been asked to break up gatherings of more than two people whereas Russia - which saw its first death due to COVID-19 this week - has said it will not impose a city-wide lockdown on Moscow.

Large parts of the world saw new restrictions this week on restaurants, which were previously allowed to seat customers during the day at a safe distance from each other but are now only allowed to stay open to provide delivery or takeout services.

According to the World Health Organisation, at least 196 countries and territories have reported cases of COVID-19 infections.

There are now more than 450,000 suspected and confirmed cases of coronavirus worldwide, with more than 20,000 deaths, according to Johns Hopkins University, which is tracking the outbreak.