Coronavirus outbreak: The real reason why COVID-19 got its name 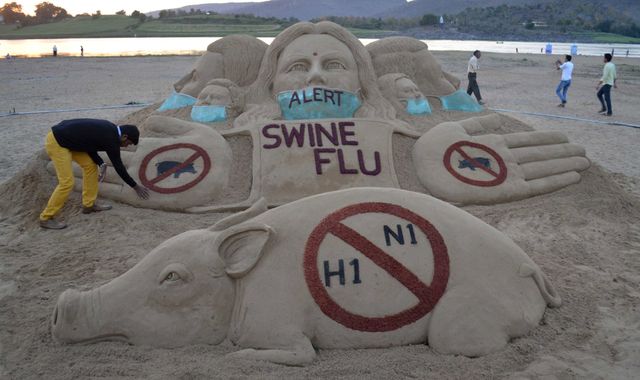 Spanish Flu, MERS, Ebola  - names of diseases which have struck fear into people around the world because of their ability to cause death and misery.

In naming the latest widespread outbreak COVID-19, the World Health Organisation (WHO) has attempted to end the stigmatising impact of diseases being named after places or animals.

All major outbreaks, such as coronavirus, will from now on have neutral "scientific" names, without reference to the location where the disease took hold or how it was transferred to humans.

COVID-19 first took hold in the Chinese city of Wuhan, after apparently making the leap to the general population from a creature in the city's seafood market.

It has led to some organisations dubbing the outbreak the "Wuhan virus".

But WHO director general Tedros Adhanom Ghebreyesus was clear in his comments on Tuesday about the reason his organisation had acted to name the disease.

"We now have a name for the disease," he said.

"Under agreed guidelines between WHO, the World Organisation for Animal Health and the Food and Agriculture Organisation of the United Nations, we had to find a name that did not refer to a geographical location, an animal, an individual or group of people, and which is also pronounceable and related to the disease.

"Having a name matters to prevent the use of other names that can be inaccurate or stigmatising."

Spanish Flu - a worldwide epidemic that is believed to have killed at least 40-50 million people between 1918 and 1920 - was named with racist undertones by a jingoistic press at the end of the First World War.

In actual fact, Spain was cited as the source of the flu because wartime reporting restrictions prohibited mention of the trenches, where the outbreak first took hold in Europe.

Being diagnosed with MERS, which stands for Middle East Respiratory Syndrome, has led to survivors being labelled "dirty", according to some scientific studies.

Swine Flu and Bird Flu have captured the public imagination but their associations have led to the mass slaughter of animals.

Meanwhile, Ebola has left the river in the Democratic Republic of Congo where that disease was first identified permanently tainted, despite the true origin of the illness that killed tens of thousands in Africa being unknown.

COVID-19 is not the name of the virus, which remains the rather technical 2019-nCov, and is often still called the novel coronavirus.

Instead, COVID-19 describes the disease itself - or the symptoms patients present with - rather than what causes it.

Most people come for testing only after coming down with symptoms like breathing difficulties and a fever.

In naming the disease, WHO is signalling it is taking COVID-19 extremely seriously, after marking it a global health emergency nearly two weeks ago.

Dr Tedros indicated on Tuesday that WHO experts were working fast to find a solution to the threat posed by the disease - which is so far killing around 2% of those infected - saying that a vaccine could be ready in 18 months.

(c) Sky News 2020: Coronavirus outbreak: The real reason why COVID-19 got its name