Coronavirus: Parliament told there is 'no evidence' virus came from Wuhan laboratory 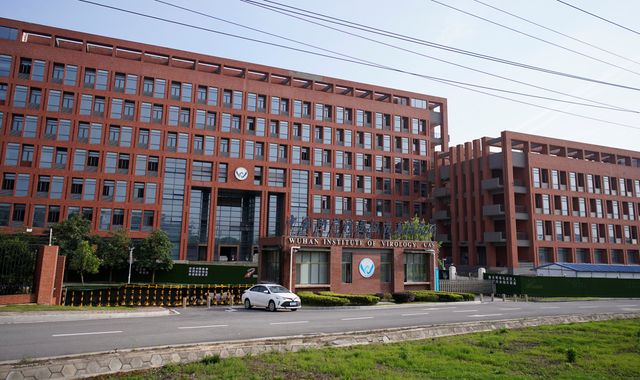 There is "no evidence" supporting conspiracy theories that the coronavirus originated in a laboratory in Wuhan, an expert has told parliament.

Claims that COVID-19 was created in a lab were amplified by Donald Trump earlier this month, although the president refused to offer any evidence or give specific details.

The coronavirus outbreak first emerged in the Chinese city of Wuhan last year and international blame around the pandemic has incited conspiracy theories about its origin.

Rumours linking the virus to the Wuhan Institute of Virology - based on geographic proximity, and without any endorsement from qualified epidemiologists - have circulated.

But speaking to the House of Lords science and technology committee on Tuesday, Professor David Robertson dismissed the conspiracy theory as "unlikely".

Following the president's comments, the US Secretary of State Mike Pompeo claimed there was a "significant amount of evidence" supporting the theory but, just two days later, admitted: "We don't have certainty."

Scientists have discovered that the coronavirus was 96% identical to coronavirus found in bats, one of the many animals sold at a Wuhan seafood market where it is suspected the virus jumped to humans.

British authorities believe it is highly likely the global pandemic is unconnected to the laboratory in Wuhan and was passed from animals to humans naturally.

"You have a virus that you think comes from an exotic species and then you have a wildlife market - that seems the most parsimonious explanation," Professor Robertson said.

He was asked whether a sample of the virus found at the Wuhan Institute of Virology - and thought to be about 40 to 50 years old - could have been behind the initial outbreak.

Professor Robertson, who is the head of viral genomics and bioinformatics at the University of Glasgow, firmly responded: "No, absolutely not.

"That's partly what has driven some of these conspiracy theories, is what is the chance they would have this virus in the labs that is close? And actually, even though it is close in sequence, it is not close in time."

"There is really no evidence for this. We can all enjoy a conspiracy theory but you need to have evidence," he added.

Scientists have analysed the entirety of the novel coronavirus' genomic sequence to assess claims that it may have been made in a laboratory or been otherwise engineered.

The value of the genomic sequence could prove vital for those developing a vaccine, but it also contains key details revealing how the virus evolved.

Researchers at the Scripps Research Institute in the US, UK and Australia discovered that the virus has proved so infectious because it developed a near-perfect mechanism to bind to human cells.

This mechanism is so sophisticated in its adaptions that the researchers say that it must have evolved and not been genetically engineered in their paper, titled "COVID-19 coronavirus epidemic has a natural origin", published in the journal Nature Medicine.

Dr Josie Golding, the epidemics lead at the Wellcome Trust in the UK, described the paper as "crucially important to bring an evidence-based view to the rumours that have been circulating about the origins of the virus causing COVID-19".

"They conclude that the virus is the product of natural evolution, ending any speculation about deliberate genetic engineering," Dr Golding added.