Coronavirus: Putin's 'got this' - but for how much longer? 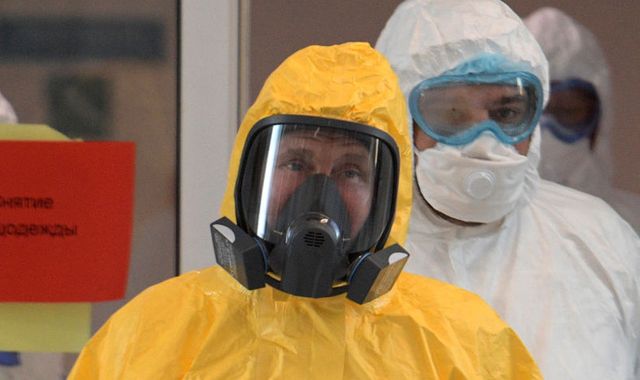 Fourteen military planes loaded with diagnostic and disinfectant kits and some of the Russian army's top virologists and epidemiologists have arrived in Italy, ready to assist the Italian government in the fight against COVID-19.

Emblazoned on the side of some of their equipment was a missive to the Italian people - "From Russia with love", as military specialists are deployed to Bergamo, the epicentre of the coronavirus crisis.

There is no doubt that President Vladimir Putin will delight in the opportunity to show political generosity at this time of unprecedented global emergency, as the great bastions of liberal democracy in Europe and the United States flounder in the face of the awful spread of the disease.

As states battling the virus adopt an every man for himself approach, it is the Kremlin - heart of Fortress Russia - which is insisting that international cooperation is key with the caveat that back home the situation is under control.

There is no need for a lockdown in Moscow, it is not even under discussion says the Kremlin's press secretary. Over-65s are being told to self-isolate.

Schools are shut, as are cinemas, gyms and swimming pools.

Gatherings of more than 50 people are banned and social distancing advocated, but no need - officials say - for a lockdown.

As of Tuesday morning, Russia had just 438 cases, but this was later updated to 495, according to the Stopcoronavirus state website which is monitoring the situation in the country.

It said that 57 new cases had been recorded in 14 regions over the past 24 hours.

But in Moscow, the city's mayor, Sergei Sobyanin, claims up to 500 people may be infected.

The official death toll in Russia is zero.

Last Thursday, a 79-year-old woman with COVID-19 died, but authorities attribute her death to a blood clot and not to the virus.

The government insists the numbers are correct, but just in case anyone was thinking of disputing them, Russia's Investigative Committee promises to prosecute anyone distorting the numbers with an "intent to aggravate panic sentiment".

The nation's chief epidemiologists declare proudly that Russia is particularly well equipped to deal with the virus thanks to Soviet efforts to build a highly centralised epidemic control system.

Georgiy Sapronov, chief infectious disease specialist to the president, told Sky News they have had the "know-how", to deal with something like this, since World War Two.

"Our country is a big one - one sixth of the world - and in our land we've experienced different epidemics, like cholera and clusters of plague in Soviet times - so we've learned to control and fight them", he said.

Alexey Maschan, a paediatric oncologist and one of the lead signatories, says the government needs to ramp up its response, but that he believes it is being transparent on numbers.

He said: "We know that for every proven case of any respiratory infectious disease, there are many cases which are clinically inapparent.

"So I can imagine if there are hundreds of proven cases there are already hundreds if not thousands of clinically undetected cases.

"This is the law of epidemics not the specific Russian situation. Once the lie begins, the war is lost."

A close relationship with Beijing and an eye for what worked there, plus a lax approach to civil liberties means Russia may have gained a head start in keeping the virus at bay.

The new government closed the country's long border with China at the end of January even though Hubei province is a good 1,864 miles (3,000km) south of Russia's Far East.

Three weeks ago, Moscow's mayor imposed a regime of "increased readiness", requiring visitors returning from the worst affected countries to self-isolate for 14 days.

The new COVID-19 crisis team has just announced it will track sick patients and those they have been in contact with, through their mobile phones - a new tech addition to the dense CCTV facial recognition surveillance system which already supervises Muscovites' quarantine.

But there is an ominous sense that the storm is coming.

The numbers of cases are low, but they are growing each day.

Behind all the protestations that there is no need for panic, the Kremlin is preparing for the worst.

The Italian military delegation will have learnings to deliver to superiors back in Moscow as to how to mitigate the worst of a pandemic back home.

Even though the authorities insist there is no need for a lockdown, have no doubt they will enforce one as soon as they feel it is necessary, and it will be strict.

Vladimir Putin has a knack for seeing opportunities in crisis and this pandemic is no exception.

What better time as oil prices plummeted and markets tanked than for Russian MPs two weeks ago, to propose zeroing the presidential term clock, allowing the incumbent to start again come 2024 as though he had not just spent the last almost two and a half decades in power.

As Western democracies battle both the exponential spread of the virus and public rage at the decision-making of their politicians, Mr Putin is able to cast himself as an anchor of stability in a wildly uncertain world.

Putin's Russia, a power capable of lending a hand at this time of crisis, sending out thousands of Russian testing kits to countries within its orbit, from Iran to Central Asia, to Venezuela - dispatching military healthcare advisers to help Italy's exhausted hospital staff, keeping Russians (apparently) safe as the rest of the world weathers the COVID-19 tornado.

But like wars, the virus changes day to day in a terrifyingly short period of time.

It may scupper the president's plans to hold a nationwide vote on 22 April to validate constitutional reforms which are little more than a fig-leaf for keeping him in power.

If it hits Russia with force, if the rouble continues to drop, there is precious little economic cushioning for the majority of Russians quite apart from the precarious nature of healthcare outside of Moscow and St Petersburg.

Speaking on state TV channel, Russia 24 on Tuesday, virologist Alexander Chepurnov. said the country is around three weeks behind Italy in terms of the spread of the virus.

Mr Putin knows that if anything causes Russians to question whether they do actually want him forever, it is this looming health crisis, and the means and efficacy by which he responds.