Coronavirus reaches African continent - and threatens to overwhelm it 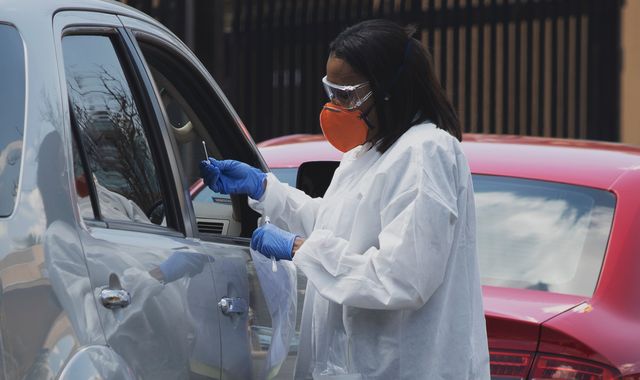 Over the past few months, the coronavirus pandemic seemed to skirt around the African continent.

But the situation has changed and the people who live here are asking themselves if they can cope.

The first cases of COVID-19 in sub-Saharan Africa were announced just three weeks ago but the rate of infection in countries like South Africa is climbing swiftly.

With more than 200 people infected, the government has responded by shutting down schools and banning large gatherings. The police are arresting citizens who test positive to the virus and refuse to go into quarantine. Health officials have stopped church ministers from preaching to their flocks.

However, the authorities can't stop this virus from spreading and just about everyone in this country knows it, including South Africa's health minister Dr Zweli Mkhize.

"In any community, 60% to 70% of the community will be affected by the virus. We can't hide that... most of us will have this virus," he told a group of doctors in the capital Pretoria.

He asked the nation to adjust its collective expectations. South Africa has "unique dynamics" he said, with the world's largest concentration of people with HIV, plus a significant number with tuberculosis.

Both groups are more susceptible to respiratory problems and may be at far greater risk from COVID-19.

"Half a million suffer from low immunity and would probably get much sicker if they contracted the new virus," he said.

We met a woman with HIV in an overcrowded Johannesburg township called Kliptown. Her name is Mandisa Madikane and we joined her after her monthly check-up at the local clinic.

She said COVID-19 was frightening.

"This is a major virus, it has taken over the world, taking people's lives. Am I safe or not? It is like a virus on top of another virus."

She added: "I love myself... I need to take care of myself."

We spoke in a shack that she shares with seven members of her family and it was painfully clear that she would not be able to self-isolate if she got it.

"Me and my son, we share the same bed, in the same room. You know I am afraid of the outcome."

This is another reality health minister Dr Mkhize felt the need to address, telling his audience that South Africa would struggle to "replicate strategies to contain the virus seen in other countries, like mass lockdowns".

I asked one of Mandisa's neighbours, called Chief Davies, whether residents would stay home if the government asked them to. He responded with something of a belly-laugh.

"People are poor, they only get by living together, working together, so life can go on. Isolate? Then things are going to get bad."

Projections show that if 20% of the population is infected, more than 500,000 people could require hospitalisation and 176,000 could lose their lives.

Nonetheless, South Africa is in a comparatively strong position in relation to other African countries. Thousands of health facilities across Africa do not have reliable oxygen supplies. The West African nation of Mali has one ventilator per one million people.

The World Health Organisation has told the leaders of African nations to "prepare for the worst and prepare today".

But there is only so much they can do.