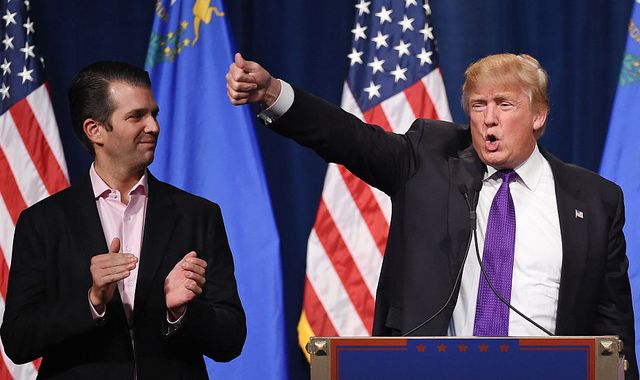 Twitter gave the president's son a 12-hour time out from tweeting on Tuesday after he posted a link to a video containing what Twitter said was misleading information about COVID-19.

Donald Trump Jr posted a video promoting the drug hydroxychloroquine, which his father has also promoted and claimed to be taking himself as a precaution against the coronavirus.

Twitter's move caused outrage among supporters of the president's son, including from Republican strategist Andrew Surabian who accused the company of engaging in "open election interference".

The eldest child of Donald Trump and his first wife Ivana, Donald Trump Jr was accused of violating Twitter's policy on spreading misleading and potentially harmful information relating to COVID-19.

The company said as a result it "temporarily limited" his account's ability to send tweets, retweets or likes, and could not follow new accounts, although he was able to send direct messages.

Twitter's action follows another incident in May during which the company hid messages from both Donald Trump senior and then the official White House account for "glorifying violence".

The company has also labelled another of the president's tweets about allegedly fraudulent mail-in ballots with a fact-check warning.

In response to these actions the president accused the company - and the entire social media industry - of censorship and anti-conservative bias, before signing an executive order aimed at curbing protections for the sites as publishers.

It comes as US infection rates of coronavirus have continued to climb since mid-June, with more than four million cases confirmed across the country.

More than 150,000 people in the US have died with COVID-19, with more than 4.2 million people testing positive for the virus - the most of any country in the world.

Last week, Mr Trump said the coronavirus pandemic "will probably get worse before it gets better" as he told Americans to wear masks when they cannot socially distance.

In June three scientists behind a controversial study that suggested that the malaria drug raised the risks of death for COVID-19 patients retracted their work.

However scientists in the UK have also halted a large trial of the drug after early results showed it had no benefit in those suffering from the virus.

"We reviewed the data and concluded there is no evidence of a beneficial effect of hydroxychloroquine in patients," said Professor Martin Landray from the University of Oxford, who is co-leading the RECOVERY trial.