Coronavirus: US suffers biggest single-day rise in cases, as officials admit 'we are facing a serious problem' 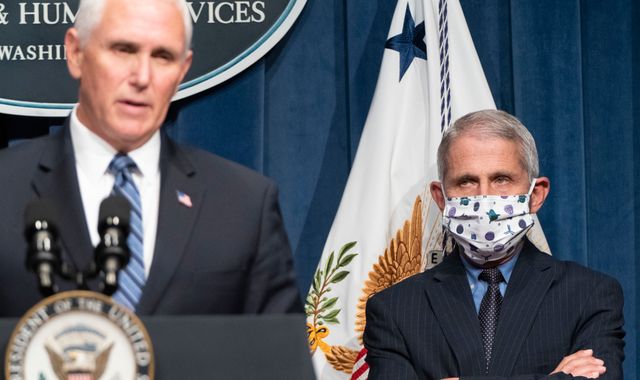 The US has suffered its biggest single-day rise in coronavirus cases, as America's leading infectious diseases expert admitted parts of the country were "facing a serious problem".

A total of 37,077 new infections were reported across the country on Thursday, according to Johns Hopkins University - topping the previous high of 36,291 on 24 April.

And while New York became the initial epicentre of the outbreak, figures indicate a growing crisis across the country's South.

Authorities say 16 states are seeing an increase in infections, with Florida recording a new daily high of 8,942 COVID-19 cases.

Alarm over the soaring number of cases there prompted state officials to ban bars from serving alcohol, while Texas's governor had ordered bars to close down by lunch on Friday.

News of the increases came as the White House announced Donald Trump had cancelled a weekend trip to his golf resort in Bedminster, New Jersey, but did not provide an explanation.

On Friday, Mr Trump said "we have a little work to do" on the coronavirus infections, adding "we'll get it done".

At least 11 states have reversed or paused reopening plans, despite the president's efforts to relax lockdown restrictions across the US.

And while he has repeatedly implied the rising number of cases being recorded is simply due to extensive testing, the high percentage of positive results among those tested - 17% in Arizona and 13% in Florida - suggested otherwise.

Dr Anthony Fauci, director of the National Institute of Allergy and Infectious Diseases, urged people to consider the welfare of others when taking measures to avoid the spread of COVID-19.

"As you can see, we are facing a serious problem in certain areas," he said during the first White House briefing by the official 'coronavirus task force' in almost two months.

"What we're missing in this is something we've never faced before: a risk for you is not just isolated to you, because if you get infected, you are part of propagating the dynamic process of a pandemic.

"Chances are that if you get infected, you're going to infect someone else"

Vice President Mike Pence attempted to sound an optimistic note at the briefing, while declining to advise people to wear masks - despite that being the official advice issued by the country's Centre for Disease Control and Infection (CDC).

He claimed 34 states showed signs of stabilising numbers of new cases, but encouraged people to continue social distancing and take other measures to help contain the spread of the virus.

But he said the federal government was focused on the rising number of infections across the South.

"As we see the new cases rising, and we're tracking them very carefully, there may be a tendency among the American people to think that we are back to that place that we were two months ago, that we're in a time of great losses and great hardship on the American people," he said.

"The reality is we're in a much better place. The truth is we did slow the spread. We did flatten the curve."

More than 2.4 million people have been confirmed to have the coronavirus in the US and at least 124,000 have died.

"We still have work to do, so we say to every American particularly those in counties and in states that are being impacted by rising cases, now is the time for everybody to do their part," Mr Pence added.

(c) Sky News 2020: Coronavirus: US suffers biggest single-day rise in cases, as officials admit 'we are facing a serious problem'