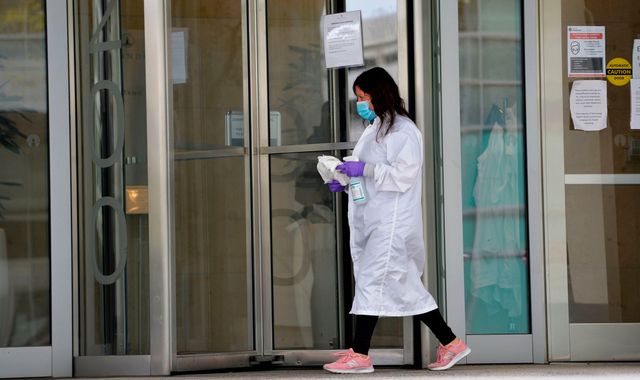 A vaccine trial in the United States is showing promising early data, after the vaccine reportedly produced protective antibodies in a small group of healthy volunteers.

Eight people took part in the safety trial by Moderna, which started in March, and the vaccine was shown to be safe while all participants produced antibodies, the biotech firm said.

Experts say the early results are encouraging, but only a small sample has been used so far and the vaccine will need further testing.

It has now been given the green light to start the second stage of human testing.

The results, led by the National Institutes of Health, have not been peer reviewed or published in a medical journal.

The Moderna trial is one of more than 100 under development across the world, as scientists race to find a viable vaccine.

An analysis of the response to the Moderna vaccine found people who received a 100 microgram dose and a 25 microgram dose had levels of protective antibodies higher than those found in the blood of people who had recovered from COVID-19.

Those who received the higher dose produced more antibodies than those given the lower dose.

"These are significant findings but it is a Phase 1 clinical trial that only included eight people. It was designed for safety. Not for efficacy," said Dr Amesh Adalja, an infectious disease expert at the Johns Hopkins Center for Health Security who was not involved in the study.

He said many glitches can occur between now and the time the vaccine is tested for its effectiveness in thousands of people, but added: "What we do see is encouraging."

In the second stage of the trial, the vaccine will be further tested for its effectiveness and to find the optimal dose.

Moderna has said it will now test a 50 mcg dose.

There will need to be a balancing act between providing a high enough dosage to produce immunity, but also sparing the amount of vaccine required in each shot so that more of the vaccine can be produced.

"In the context of a pandemic, we expect demand to far outstrip supply and the lower the dose, the more people we expect to be able to protect," said the company's chief medical officer Tal Zaks.

Moderna says it expects to start a larger third-stage trial in July.

During the early testing of Moderna's vaccine, three participants showed "flu-like" symptoms following a second shot of the highest dose.

The company said it believed the symptoms showed a strong immune response.

Last week, US regulators fast-tracked the vaccine trial and backed it with $483m (£396m), which Moderna says would enable it to supply millions of doses per month in 2020.

Experts predict a safe and effective vaccine could take 12 to 18 months to develop.