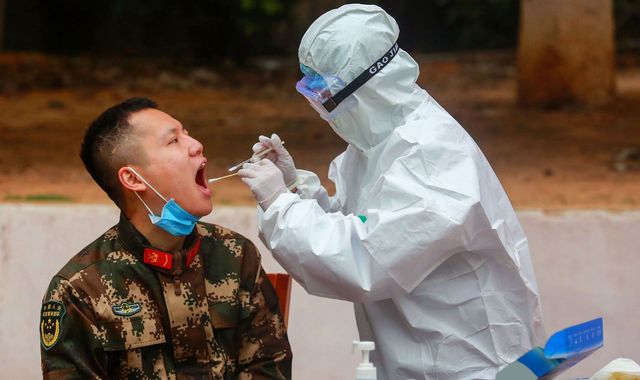 An apparent slowdown in the spread of the coronavirus epidemic should be treated with "extreme caution", according to the head of the World Health Organisation (WHO).

"This outbreak could still go in any direction," the WHO's director general, Dr Tedros Adhanom Ghebreyesus, said.

The country's national health commission said 2,015 new cases were counted on Tuesday, the second straight daily decline and down from nearly 3,900 a week ago.

There have now been more than 45,000 cases worldwide of the disease, now named COVID-19, which has killed more than 1,100 people in China.

The country has locked down an unprecedented 60 million people in an effort to curb the spread of the virus, which has hit hardest in the city of Wuhan and the surrounding Hubei province.

Following a two-day meeting on science and innovation into measures to tackle the new viral outbreak, Dr Tedros welcomed the "positive response of the research community".

He thanked the experts for meeting at short notice "to come up with concrete plans and commitment to work together".

He added that a WHO-led advance team that travelled to China earlier this week had made "good progress" on the composition and scope of its work.

The head of the WHO's emergency programme, Mike Ryan, also said the stabilisation of new case numbers in China was reassuring, as was the apparently less aggressive and less accelerated behaviour of the virus outside of Hubei province.

"[That] is to a great extent due to a huge public health operation in China," he told the briefing.

"That... gives us an opportunity for containment."

He added that it was still too early "to predict the beginning, the middle or end of the epidemic".

A number of major events have been postponed or cancelled, including the Formula One Chinese Grand Prix, due to the coronavirus outbreak.

Organisers of the Mobile World Congress (MWC) have confirmed the technology show in Barcelona has been cancelled after a growing number of firms pulled out over coronavirus fears.