George Floyd death: Trump says he was inspecting White House bunker, not shielding because of protests 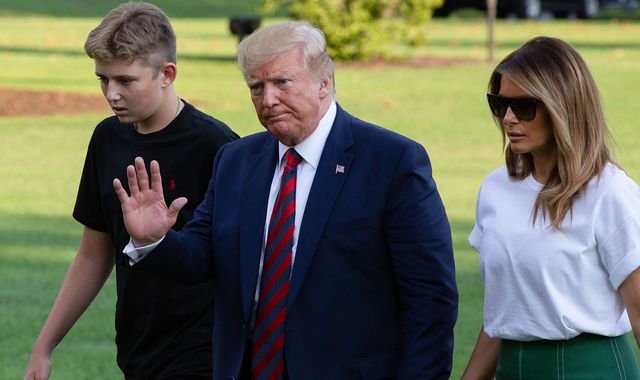 Donald Trump says he went to an underground White House bunker for an "inspection", rather than for protection from protesters.

The US president was taken to the facility amid demonstrations nearby on Friday, with reports at the time suggesting he had been there for almost an hour along with First Lady Melania Trump and their son Barron.

But while the Republican admitted he had been to the bunker, he insisted it had only been briefly and had nothing to do with the protests.

He told Fox News Radio: "It was much more for the inspection. I was there for a tiny, little period of time.

"They said it would be a good time to go down and take a look because maybe sometime you're going to need it."

Mr Trump went on to repeat his threat of military action in New York, continuing his efforts to link civil unrest following the death of George Floyd to liberal leaders in the city.

"If they don't get their act straightened out I will solve it. I'll solve it fast," he said.

The president also denied tear gas was used on peaceful protesters outside a historic church in Washington DC to clear the way for him to stage a photo opportunity - contradicting the accounts of many who were present.

Having renewed his attacks on prominent figures including MSNBC anchor and former congressman Joe Scarborough and CNN presenter Chris Cuomo, he was asked why he chose to focus on such spats amid an ongoing national crisis.

It came as US Defence Secretary Mark Esper said he opposed the use of active-duty soldiers to contain the protests, which Mr Trump has suggested.

Mr Esper said troops in a law enforcement role should be used in "only in the most urgent and dire of situations".

"We are not in one of those situations now," he added.

Protests have raged across the US since the death of 46-year-old Mr Floyd in Minneapolis, after a white police officer was filmed kneeling on his neck for at least eight minutes.

Having previously criticised his successor's handling of the crisis, former president Barack Obama is due to deliver a speech on Wednesday at 10pm UK time (5pm EST).