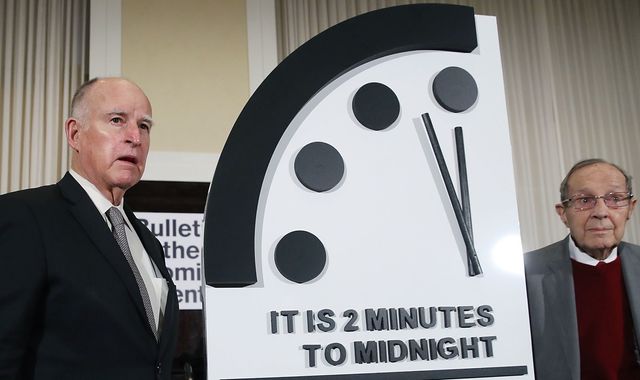 Humankind, like Cinderella, has only until midnight - but the strike of the Doomsday Clock will bring far more serious repercussions than those that faced the Disney princess.

Scientists have said the Doomsday Clock - a metaphor for a global apocalypse - has moved closer to midnight than ever before.

The countdown was set up in 1947 by The Bulletin of the Atomic Scientists, which was working on the Manhattan Project to design and build the first atomic bomb.

It was originally intended to warn of the threat of nuclear Armageddon, but also considers other emerging threats like climate change, biotechnology and artificial intelligence.

The announcement from the clock's keepers means the perceived threat is now more severe than it was last year and in 1953, when it was two minutes away.

President and chief executive of the Bulletin of the Atomic Scientists, Rachel Bronson, said the world has entered into the realm of a two-minute warning - with high danger and little room for error.

"We are now expressing how close the world is to catastrophe in seconds - not hours, or even minutes," Ms Bronson said.

"It is the closest to Doomsday we have ever been in the history of the Doomsday Clock.

"We now face a true emergency - an absolutely unacceptable state of world affairs that has eliminated any margin for error or further delay."

A statement from the bulletin, a non-profit organisation run by some of the world's most eminent scientists, said: "Humanity continues to face the two simultaneous existential dangers of nuclear war and climate change - compounded by a threat multiplier, cyber-enabled information warfare - that undercuts society's ability to respond.

"The international security situation is dire, not just because these threats exist, but because world leaders have allowed the international political infrastructure for managing them to erode."

Former president of Ireland Mary Robinson described the announcement as a "solemn occasion".

"We ask world leaders to join us in 2020 as we work to pull humanity back from the brink," the chairwoman of The Elders and former UN high commissioner for human rights said.

"The Doomsday Clock now stands at 100 seconds to midnight, the most dangerous situation that humanity has ever faced. Now is the time to come together - to unite and to act."

While the clock did not move in 2019, its minute hand was set forward in 2018 by 30 seconds, to two minutes before midnight.