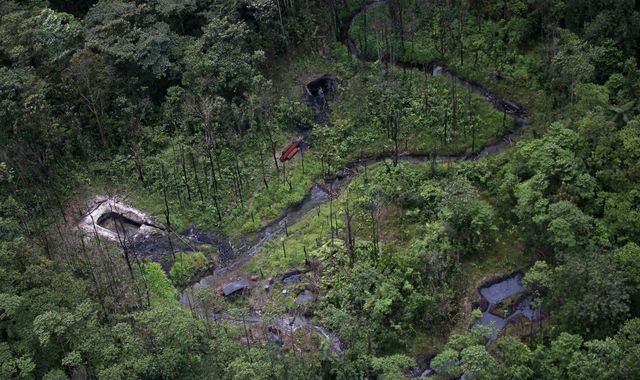 More people than ever before are losing their lives trying to defend land from environmental or climate threats, a campaign group claims.

Four people a week have died on average since the Paris Agreement was signed in 2015, Global Witness says.

A total of 212 murders were reported in 2019 and over half of them were concentrated in just two countries - Colombia and the Philippines, figures from the 12-month period show.

But a human rights activist in the Colombian capital Bogota told Sky News the situation has got even worse during the coronavirus pandemic because of lockdowns in rural communities.

Vivian Newman of the research and advocacy group Dejusticia said: "It's easier for the enemies of people who don't like their causes now.

"It's easier to spot them, threaten them and kill them.

"It's because of a combination of the absence of a state presence, illegal actors and visibility of the rural leaders who are now locked down in their homes.

"Colombia is a big country and in general these rural leaders are spread throughout the country in places where the presence of the government is not strong and they are more visible.

"But people will continue with their causes to protect the land, the air and clean water.

"They are not going to be stopped because this is their life, they fight for their resources and it's their livelihoods."

A spokesman for Global Witness added: "Communities across the world are standing up to carbon-intensive industries and exposing unsustainable business practices wreaking havoc on ecosystems and our climate.

"These are the people on the frontline of the climate crisis trying to protect climate critical areas and reverse these devastating practices.

"Time after time they have challenged the damaging aspects of industries rampaging unhampered through forests, wetlands, oceans and biodiversity hotspots.

"Yet far too many businesses, financiers and governments fail to protect them in their vital and peaceful work."

Global Witness says it defines land and environmental "defenders" as "people who take a stand and peaceful action against the unjust, discriminatory, corrupt or damaging exploitation of natural resources or the environment".

One in 10 of the reported fatalities were women, it added.

In all countries attacks were most frequently linked to communities opposing carbon-intensive oil, gas and coal projects and clearing land for commodities like palm oil and sugar.

In the UK climate activists, unable to take to the streets, say part of their role in lockdown is giving a voice to people in other parts of the world for whom the risks are so much greater.

Rosanna Wiseman, a UK climate activist with Our Future Now told Sky News: "I think there can be some people who are dismissive of climate activists in the UK who label them all sorts of names and say this is a problem that isn't affecting us right now as we can't really see the effects in the UK of the climate crisis.

"So that's why it's important to understand how dangerous it is in other parts of the world."

The group says it has been using the COVID-19 outbreak to forge greater global links.

Ms Wiseman said: "A lot of the workshops we used to do in real life are now being put online and that gives us an opportunity for people from all over the world to join.

"In a way coronavirus has brought people closer together because we're able to connect over the internet."

Total deaths in 2019 by country

Total deaths in 2019 by sector