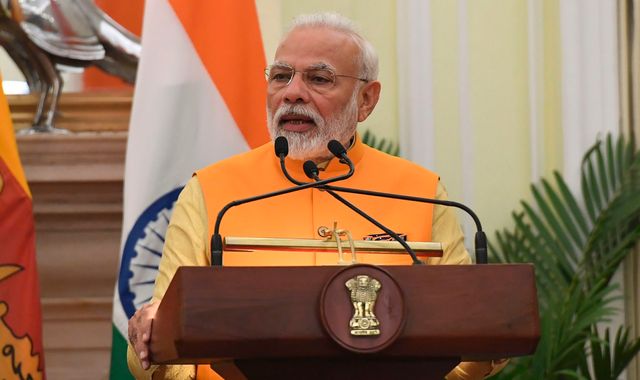 Voters resoundingly backed the incumbent Aam Aadmi Party (AAP), or "common man's" party, which took 62 out of the 70 seats.

Mr Modi's right-wing nationalist Bharatiya Janata Party (BJP), which campaigned strongly to unseat the AAP, picked up eight seats, five more than it won in the last local election in 2015.

The country's main opposition Congress party, which headed the city's government between 1998 and 2013, failed to win a single seat in the capital.

The BJP defeat was a setback for Mr Modi, coming less than eight months after he led his party to a resounding victory in national elections.

It won all seven of the capital's parliamentary seats in those polls.

Addressing hundreds of supporters, New Delhi chief minister Arvind Kejriwal, who heads the AAP, said voters had "given birth to a new brand of politics" to meet people's basic needs.

The BJP had tried to appeal to majority Hindus by focusing on national issues such as the controversial citizenship law.

The bill fast-tracks naturalisation for migrants for neighbouring Pakistan, Bangladesh and Afghanistan who are living in the country illegally - but it excludes Muslims.

This led to widespread protests and 23 people were killed in clashes between police and protesters in December.

The AAP's policies favouring the disadvantaged focused on fixing state-run schools and providing cheap electricity, free healthcare and bus transport for women during its five years in power.

Mr Modi congratulated Mr Kejriwal on Twitter, saying: "Wishing them the very best in fulfilling the aspirations of the people of Delhi."

Local BJP leader Manoj Tewari denied the AAP accusation that his party had tried to create a Hindu-Muslim divide during the elections.

In the 2015 elections, Mr Kejriwal's party won 67 seats and the BJP three.