Iran warns UK against 'any new mistake' after ambassador arrest 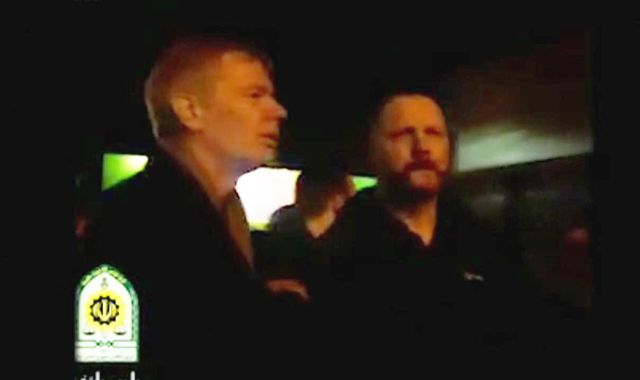 Iran's foreign ministry has warned Britain to avoid making "any new mistake" following the arrest of the UK's ambassador to Tehran.

British diplomat Rob Macaire was arrested by police in the Iranian capital on Saturday as demonstrations broke out over the downing of a Ukrainian passenger plane by Iranian forces.

He was subsequently called in by the country's foreign ministry to explain his "illegal and inappropriate" presence at the event.

Iran's ambassador to the UK, Hamid Baeidinejad, was subsequently summoned to the Foreign Office on Monday following the "unacceptable" treatment of Mr Macaire - enabling ministers to convey their "strong objections".

"Any new mistake of Britain will be severely confronted by Iran and London will be responsible for that," the ministry said, according to Iranian state TV.

"The presence of the UK envoy is against diplomatic norms... Threatening Iran with fresh sanctions over that will cause tension between Tehran and London."

Earlier, Iranian police released video footage of Mr Macaire that was taken shortly before he was arrested.

The ambassador, who was later freed, said he had gone to a vigil for the people who died when Iran shot down the airliner, and left when some chanting began.

He tweeted that he was detained "half an hour after leaving the area", adding that "arresting diplomats is of course illegal, in all countries".

The Iranian foreign ministry said he was summoned to explain his "illegal and inappropriate presence" at an anti-government protest.

Iran's Basij militia, which is affiliated with Iran's elite Revolutionary Guard, gathered outside the UK embassy in Tehran demanding it be closed, according to Iranian state media.

In an interview with Sky News last week, Mr Baeidinejad denied that Iran had shot the plane down, but later apologised for "conveying such wrong findings".

The prime minister's official spokesman said Mr Macaire's detention was an "unacceptable breach of the Vienna Convention and it needs to be investigated".

He added: "We are seeking full assurances from the Iranian government that this will never happen again.

"The FCO has summoned the Iranian ambassador today to convey our strong objections."

Foreign Secretary Dominic Raab addressed the House of Commons on Monday afternoon about the ongoing situation in Iran, saying the regime is at a "crossroads".

Mr Raab said: "It can slip further and further into political and economic isolation.

"But there is an alternative and the regime does have a choice: the diplomatic door remains open, now is the time for Iran to engage in diplomacy and chart a peaceful way forwards."

Meanwhile, US President Donald Trump has tweeted his defence of the killing of Iranian Major General Qassem Soleimani, saying it did not matter whether he posed an imminent threat or not, given that the past military leader's "horrible past".

Four British people died when the Ukrainian International Airlines flight was hit by a missile southwest of Tehran, and Downing Street suggested their families could seek compensation from the Iranian government.

The prime minister's spokesman added: "As a first step we need a comprehensive, transparent and independent investigation to know exactly what happened.

"Of course the families of the four British victims deserve justice and closure and we will continue to do everything we can to support them in getting that, including options for compensation."

Protests in Iran have continued to escalate as the country struggles to control public anger over the downing of the passenger jet.

Police used tear gas to disperse hundreds of demonstrators chanting against the country's leaders - including Supreme Leader Ayatollah Ali Khamenei - on the second day of protests in Tehran, with rallies spreading to other Iranian cities.