Kobe Bryant: Michael Jordan leads tributes to 'one of greatest players of his generation' 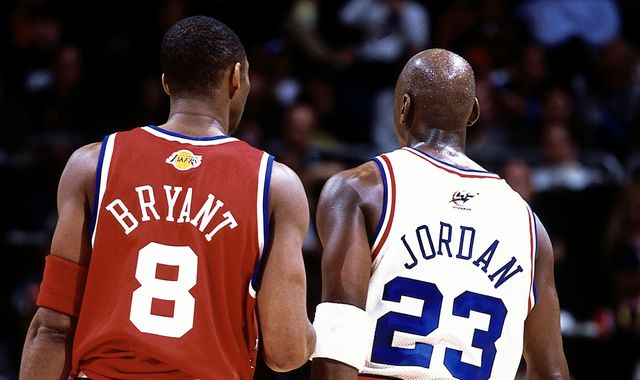 Michael Jordan has led the tributes to fellow NBA legend Kobe Bryant after his death in a helicopter crash at the age of 41.

Fans of the LA Lakers hero from across the worlds of sport, entertainment, politics and beyond have expressed their shock at his sudden passing, as well as current and former basketball greats.

Bryant was one of nine people killed when the private helicopter came down in Calabasas, California, on Sunday, with his 13-year-old daughter Gianna among the victims.

Jordan, widely regarded as the greatest basketball player of all-time, has described Bryant as "one of the greats of the game and a creative force".

He said in a statement: "I am in shock over the tragic news of Kobe's and Gianna's passing. Words can't describe the pain I'm feeling."

Jordan added: "I loved Kobe - he was like a brother to me. We used to talk often, and I will miss those conversations very much. He was a fierce competitor, one of the greats of the game and a creative force.

"Kobe was also an amazing dad who loved his family deeply - and took great pride in his daughter's love for the game of basketball."

Another legend quick to pay tribute was Bryant's former Lakers teammate Shaquille O'Neal, who tweeted: "There's no words to express the pain Im going through with this tragedy of loosing my neice Gigi & my brother @kobebryant.

"I love u and u will be missed. My condolences goes out to the Bryant family and the families of the other passengers on board. IM SICK RIGHT NOW."

Former Lakers president Magic Johnson said he was "in disbelief" and had been "crying all morning".

"It's hard to accept. Kobe was a leader of our game, a mentor to both male and female players," he added.

Golfer Tiger Woods was a friend of Bryant's and played the final round at the Farmers Insurers Open in San Diego unaware that he had died.

His caddie Joe LaCava broke the news to him at the end of his round, having refrained from telling him between holes, prompting a clearly shocked Woods to exclaim: "Excuse me?"

Afterwards, Woods, a lifelong Lakers fan, told reporters: "He came in the league and I turned pro right around the same time and we had our 20-year run together.

"It's a shocker to everyone, unbelievably sad, and one of the more tragic days. I was just told about five minutes ago.

"Life is very fragile as we all know. You can be gone at any given time and we have to appreciate the moments that we have. I just can't imagine what his family's going through right now."

With the 62nd Grammy Awards taking place at the Staples Center, the same arena where Bryant became a Lakers legend, the biggest night in music opened with a tribute to the NBA star.

Other Bryant fans from around the world have paid tribute on social media.

Sprinter Usain Bolt said he "still can't believe" the news and shared a picture of himself with the LA Lakers superstar.

Rapper Kanye West tweeted a picture of himself with the basketball star and posted: "Kobe, We love you brother We're praying for your family and appreciate the life you've lived and all the inspiration you gave."

His wife, reality TV star Kim Kardashian, posted a picture of Bryant with his daughter, including the words: "This has affected us all so much but I cannot begin to imagine what Vanessa is feeling losing her husband and her baby girl. I cry just thinking about it."

Kardashian's half sister, supermodel Kendall Jenner, also posted a tribute on Instragram, writing: "You had the magical ability of bringing people together, through sports and through your soul. we feel you so heavily today, i know you can feel us too."

Actress Whoopi Goldberg said the star was a "hero to many including my grandson, extraordinary athlete and always kind to me & my family".

In an Instagram post, Justin Bieber wrote: "You always encouraged me mamba. Gave me me some of the best quotes that we smile about to this day."

Bryant's nickname during and after his career was Black Mamba.

Bieber also shared an old photograph of the pair smiling together.

Singer Demi Lovato wrote on Instagram: "Kobe you were always so sweet to me. Known you over 10 years.. not super well but we always joked about you coming over and playing that game of horse!"

Taylor Swift posted a moving tribute on Twitter, writing: "My heart is in pieces hearing the news of this unimaginable tragedy. I can't fathom what the families are going through. Kobe meant so much to me and to us all."

Friend of the Bryants Jennifer Lopez shared a moving tribute on Instagram, writing: "The most unfair thing in life is to lose a child and husband on the same day. Vanessa, I pray for your strength and that God guides you each step of the way through this unimaginable heartbreak."

Former Spice Girl Victoria Beckham said the basketball player and his daughter's death "struck us hard as a family", adding: "Kobe Bryant was an incredible figure on and off the court, a friend to David and determined to inspire the next generation."

He said: "Literally devastated to hear the news about @kobebryant, his daughter Gianna and all those on board the helicopter crash. My thoughts and prayers are with his family and also of the other victims."

Cristiano Ronaldo called Bryant a "true legend and inspiration", and Lionel Messi posted on Instagram: "I have no words ... All my love for Kobe's family and friends.

"It was a pleasure to meet you and share good times together. You were a genius like few others."

Stars of tennis have also expressed their disbelief at Bryant's sudden death, as many of the sport's top pros continue to compete at the Australian Open.

Novak Djokovic, who will play his quarter-final in Melbourne on Tuesday, was among those who knew Bryant and had spoken of their friendship in a TV interview just a few days ago.

He wrote on Instagram: "My heart truly mourns over the news today. Kobe was a great mentor and friend. There are not enough words to express my deepest sympathies to the Bryants and every family suffering from this tragedy."

Rafael Nadal added his condolences on Twitter, saying: "I woke up this morning with the horrible news of the tragic death of one of the greatest sportsman in the world. Kobe Bryant, his daughter Gianna and other passengers. My condolences to his wife and families. I am in shock."

In a post on Instagram stories, Andy Murray wrote: "This has hit me hard. Thinking of all his family, friends and colleagues."

US gymnast Simone Biles also posted a photo of herself with the NBA star and other members of the American gymnastics team.

And the children's TV programme Sesame Street remembered its "friend" Bryant, who appeared on the show to explain the word "miniature" with the help of Abby Cadabby.

Bryant was an 18-time All Star and named the NBA's Most Valuable Player in 2008.

When he announced his plans to retire in 2015, he was described by NBA commissioner Adam Silver as "one of the greatest players in the history of our game".

On his retirement, Bryant wrote a poem called "Dear Basketball", which was later turned into an acclaimed animated film narrated by the player.

The short film won an Oscar for Best Animated Short Film in 2018.

British actor Idris Elba said Bryant "would always be remembered" for his life on and off the court - and US presidents past and present have also paid tribute.

Actor Ben Affleck also paid tribute and said the tragedy "reminds us just how short and precious life is, and a reason to be grateful and celebrate life while we can".

Leonardo DiCaprio tweeted: "Kobe was truly larger than life, a legend. May he and all those who lost their lives today rest in peace. Love and condolences to his family. LA will never be the same."

Actress Reese Witherspoon tweeted she was "devastated" at the news of Bryant's death and described him as an "extraordinary athlete, and a genuinely kind, wonderful man."

Donald Trump tweeted: "Kobe Bryant, despite being one of the truly great basketball players of all time, was just getting started in life. He loved his family so much, and had such strong passion for the future.

"The loss of his beautiful daughter, Gianna, makes this moment even more devastating. Melania and I send our warmest condolences to Vanessa and the wonderful Bryant family. May God be with you all!"

His predecessor Barack Obama said: "Kobe was a legend on the court and just getting started in what would have been just as meaningful a second act. To lose Gianna is even more heartbreaking to us as parents.

"Michelle and I send love and prayers to Vanessa and the entire Bryant family on an unthinkable day."

Earlier on Sunday, the NBA Twitter account shared footage of Bryant and fellow NBA star LeBron James, who had surpassed Bryant to become the league's third-highest scorer of all time.

Other NBA stars have also shared tributes to the legend.

NBA Hall of Famer Larry Bird said: "Kobe was not only an icon in the sports arena, he was a man of the world and touched so many lives and communities in the most positive ways.

"His star was continuing to rise every day and he knew no limits because of his many intellectual and creative talents and desire to give back to others - his passion for the game, for his family and for others was apparent in everything he accomplished."

And Pau Gasol, who won two of his championship titles with Bryant, tweeted: "Beyond devastated... my big brother... I can't, I just can't believe it."

Five-time NBA Most Valuable Player Bill Russell wrote: "I'm at a loss for words. @kobebryant was a long-time friend, an inspiration and we shared our first ever commercial @espn together as professionals. I love you forever. #RIPMAMBA"

The Orlando Magic, who are facing the Los Angeles Clippers tonight, said they would hold a moment of silence before the game in honour of Bryant.

During the game between San Antonio Spurs and Toronto Raptors, the players paid a fitting tribute to the star by letting the 24-second shot clock run out to start the game in honour of Kobe, who wore number 24 throughout the latter half of his career with the Lakers.

As the clock ran down, fans of both sides chanted Kobe's name.