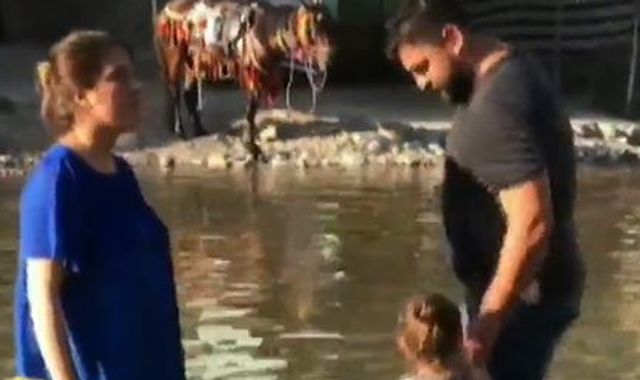 A family in Kurdistan had a narrow escape after bomb landed just metres from where they were playing in a stream.

Footage of the video shows the family - including two young children - playing in some water in the village of Kuna Masi in the disputed region of Iraq.

Moments later, the bomb is heard zooming through the air and abruptly lands next to the family.

The two children are heard screaming before a man says: "Wait, what was that?"

The video then ends seconds later.

Shaho Osman, mayor of the nearby town of Sharbazhir, confirmed that the incident was an airstrike, describing it as an "unknown warplane" which had "targeted a shop".

One person is reported to have died while several others were injured in the strike. The family in the video all survived.

A relative of the family, Jil Swani, posted the video online, stating that it had been filmed by his sister-in-law and featured his brother's family.

He later said: "The family are all safe luckily and they're back home now. My nephew had cried himself to sleep, and my brother, when I talked to him, was more angry than anything else."

Turkish forces have been blamed for the attacks after they started targeting parts of northern Iraq on 15 June.

But the Turkish defence ministry said only areas occupied by Kurdistan Workers' Party, which has been in a dispute with Turkey since 1984, were being targeted.

In a tweet, posted that day by the ministry, it said: "We continue to destroy the lairs of terrorists on their heads. The terrorist 2 PKK terrorist Air Force Command detected in the Gara region in northern Iraq has been successfully neutralised as a result of the sudden air operation."