Man rescued from floods after 10 hours clinging to tree 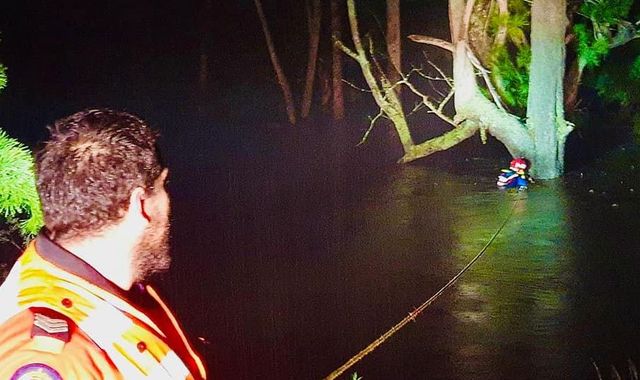 A man has been rescued from rising floodwaters after 10 hours clinging to a tree in Australia.

It is unclear why the man entered the Brogo River near the New South Wales town of Bega, around 260 miles from Sydney, on Monday evening.

The river was swollen by recent heavy rain and he was swept downstream, the State Emergency Service said.

He managed to grab hold of a tree, holding on for around 10 hours before a passer-by spotted him at 4am on Tuesday and called for help.

Emergency services rescued him by boat about an hour later.

Local SES Commander Michelle De Frisbom told the Australian Broadcasting Corp: "He wasn't in great condition when we pulled him out.

"He was suffering the effect of hypothermia... even thought it wasn't that cold.

"He had been in the water for quite a number of hours... he is one very lucky man."

The rescue came after days of heavy rain in parts of eastern Australia, forcing evacuations, cutting power and shutting schools.

But the rain has also helped to extinguish a number of bushfires in NSW, including the Currowan fire in the Shoalhaven region, which had burned for 74 days and destroyed more than 300 homes.

The heavy rain has also seen Sydney's water storage level soar to 71.4% full by Tuesday morning - up from 43% on Friday, WaterNSW said.

Sydney received almost 400 millimetres of rain in the four days to Monday morning but the NSW Bureau of Meteorology said it was not yet enough to bring recovery from the drought that has clung to some parts of Australia for years.

They said: "Recent rainfall has been beneficial for some drought and fire affected areas.

"However, several months of above average rainfall will be needed to see a recovery from current long-term rainfall deficiencies."