Micheal Martin: Ireland elects a new leader - who is he and why will he only get two years? 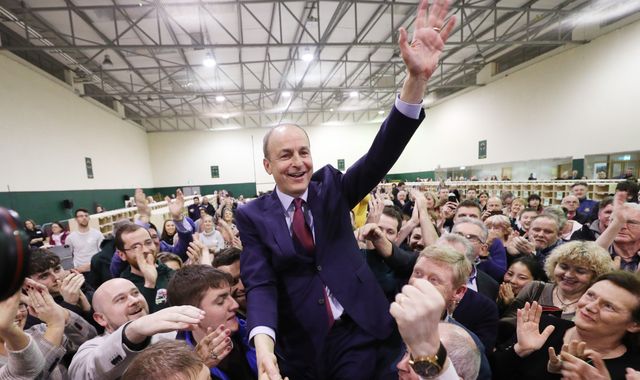 Under the terms of a coalition deal, he will hold the job until 2022, when it will rotate back to his predecessor, Leo Varadkar. So who is the new head of the Irish government, and what makes him tick?

Described as a long-time "taoiseach-in-waiting", Micheal Martin has finally ascended to that office… for a time. His Fianna Fail party has entered an unprecedented coalition with arch-rivals Fine Gael, as well as the smaller Green Party, to form Ireland's new government.

It means the 59-year-old avoids the indignity of remaining the only Fianna Fail leader not to become taoiseach. Widely regarded as a capable and wily career politician, he has spent nine years rebuilding his party after they suffered a humiliating election defeat in 2011 - the worst electoral result in the history of the Irish state. Now, he leads them back into power.

"He's tough, he's incredibly hardworking, he takes nothing for granted. He is deeply committed to public service. When Fianna Fail suffered a catastrophic electoral defeat back in 2011, he had the option of walking away. But he chose not to, he chose to rebuild the party from the ground up, and I think he's done an incredible job of that."

Micheal Martin at a glance:

Micheal (pronounced Mee-hawl) Martin was born in Cork on 1 August 1960, son of bus driver and boxer Paddy "The Champ" Martin and Eileen Lana Corbett. He was the third of five children, with a twin brother Padraig, as well as two sisters and another brother. They were raised in a modest house on O'Connell Avenue, in the mostly working-class area of Turner's Cross.

Octogenarian brothers Michael and Finbar O'Riordan have lived a few doors down since the 1940s. Standing on their porch, they remembered the young Micheal Martin growing up, and how he still makes time for a chat.

"I know Micheal very well," said Finbar. "The last election he was around here and he's one of those guys who will always call into you, always have a cup of tea with you… he'll make a great taoiseach, a great taoiseach."

But even on Mr Martin's childhood street, some residents have turned away from him and his party, reflecting the fractured result of February's general election.

Annie Thompson, returning home with her young daughter and a haul of buns, said: "It's not a good thing at all. We voted for change, and he's not change at all. He said he'd never go in with Fine Gael, and that's exactly what he's done." She voted for Sinn Fein.

He was first elected to the Dail (lower house of Irish parliament) in 1989 and served as a cabinet minister in the Fianna Fail governments of Bertie Ahern and Brian Cowen between 1997 and 2011.

Tall and rangy, Mr Martin likes to take care of his health, and is well-known for choosing a breakfast of muesli and fruit in the Dail restaurant, in stark contrast to the traditional fry-ups enjoyed by many other members. One of his proudest moments in politics came in 2004, when as minister for health he introduced Ireland's workplace smoking ban, a European first.

However, his place in the Fianna Fail-led governments that oversaw Ireland's economic collapse and subsequent EU/IMF bailout has been a millstone that he has struggled to shake off, especially now as he returns to Government Buildings.

Another party colleague and Cork North-West TD (member of the Dail), Michael Moynihan, acknowledges Fianna Fail's mistakes of the past, but is adamant that the new taoiseach will not dwell on history.

Mr Martin himself apologised for Fianna Fail's actions preceding the financial crisis when he was elected leader of the shattered party in 2011. "We made mistakes," he said. "We got things wrong. And we are sorry for that."

He also had to apologise that year for using the broken English words "You Irish very good at software" in a Chinese accent when recounting a trade mission to China. The controversy quickly blew over.

Since then, he has rarely put a foot wrong as he steadily rebuilt Fianna Fail's electoral fortunes. In February's general election, they under-performed compared with polling, but still finished as the largest party in the Dail with 38 seats (including the speaker), although this is well short of a majority. Months of torturous coalition negotiations resulted in the party returning to government.

Political adversaries have long made much of his reputation as a "ditherer", something his allies reject as completely unfair.

"There are very mixed views on him," said well-known political journalist Lise Hand. "Some people say he's very dithery, indecisive, and he tends to put off decisions, whereas other people would argue that he's actually a wily operator and a tough guy who will make hard decisions to get his party back into power.

"It will be interesting to see which Micheal Martin shows up at Government Buildings."

:: Listen to the All Out Politics podcast on Apple Podcasts, Google Podcasts, Spotify, Spreaker

For more than 30 years, Mr Martin has been married to Mary O'Shea, who he met at university. The couple have had five children together, but two have passed away. In 2010, their daughter Leana died in hospital in London at the age of seven, having battled a cardiac condition. A son, Ruairi, passed away in infancy. The Martins have a daughter, Aoibhe, and two sons, Micheal Aodh and Cillian.

The latter two play Gaelic football for Mr Martin's beloved Nemo Rangers GAA club. He joined the club as a 10-year-old in 1970, and has remained actively involved ever since. The club's public relations officer, Paul Barry, said he's a regular spectator at matches.

"I think it's the freedom," said Mr Barry, as the clubhouse prepared for training to restart after a long coronavirus hiatus. "He's able to relax outside of politics. He comes here to the club and he's just Micheal. He's not the leader of any party, he's just Micheal." Members said Mr Martin won't be treated any differently when he returns as taoiseach.

It's certain Mr Martin will have a lot less time for games in the coming months. He becomes taoiseach at a time when the post has a groaning in-tray. An ongoing pandemic, a coalition of necessity with traditional political enemies, dire economic data and the spectre of a potential no-deal Brexit lie ahead.

Mr Martin has just over two years to overcome these obstacles, and create a political legacy that will warrant his long wait for the top job in Ireland.

(c) Sky News 2020: Micheal Martin: Ireland elects a new leader - who is he and why will he only get two years?