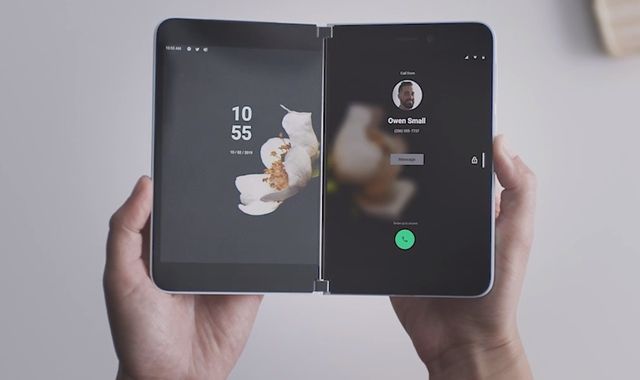 The specifications have been revealed for Microsoft's new dual-screen Surface Duo smartphone - but the company isn't calling it a smartphone.

Although the firm has kept quiet about what the device will feature, a lot of the details have been acquired from sources by Windows Central as staff are being able to take units home.

The Surface Duo is unusual - something between a folding phone and the interactive whiteboard of the Surface - but it will be running Android rather than Windows 10.

The Surface Duo was announced last October but despite running a mobile operating system - and being able to make calls and send SMS texts - the company is not describing it as a phone.

Although it won't support 5G according to Windows Central, noting an issue with the Qualcomm Snapdragon 855 processor which would require an internal redesign.

A fingerprint sensor will provide users with a biometric method of accessing the device.

Unlike foldable screen devices, the Surface Duo has two separate screens connected by a 360-degree hinge.

Foldable phones have yet to really take off as a market, with expensive devices launched by Huawei, Samsung, and LG last year anticipating significant consumer interest - which hasn't yet translated into sales.

Samsung was forced to delay the release of its new Galaxy Fold smartphone after reviewers experienced breakages within days of receiving the device, prompting journalists to post scathing reviews of the product.

Although Microsoft discontinued its Windows Phone line in 2015, the Surface Duo - being only 4.8mm thick, with an 11MP camera and the ability to make calls - could be seen as a quiet attempt to return to that market.

The device is expected to be released this year with 6GB of RAM and between 64 and 256GB of storage.