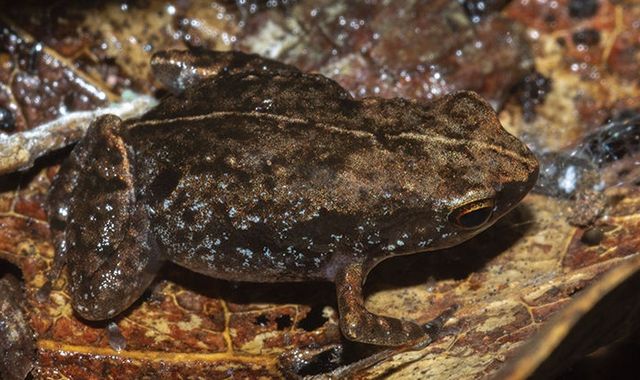 A new species of frog no bigger than a 5p coin is already being classified as critically endangered.

The amphibian was found to live in three forest patches, which scientists have said are "severely threatened by fire, drought and high levels of forest clearance".

Dr Samuel Penny, a lecturer at the University of Brighton, was part of the team that discovered the tiny frog during an expedition to the island, off the east coast of Africa.

He said: "This small and inconspicuous frog measures around 1cm in length, and inhabits the leaf litter of relatively undisturbed forests.

"Habitat loss across its limited range suggests it should qualify as critically endangered.

"The species name honours Christoph Froschauer (ca. 1490-1564), a renowned printer whose family name means the man from the floodplain full of frogs."

He added that Mr Froschauer used to sign his books with a woodcut showing frogs under a tree.

Dr Penny said: "It's amazing to find a completely new variety of frog, but it's worrying to know they are already threatened with extinction."

Dr Penny's paper on the discovery has been published in the peer-reviewed journal Zoo Keys.