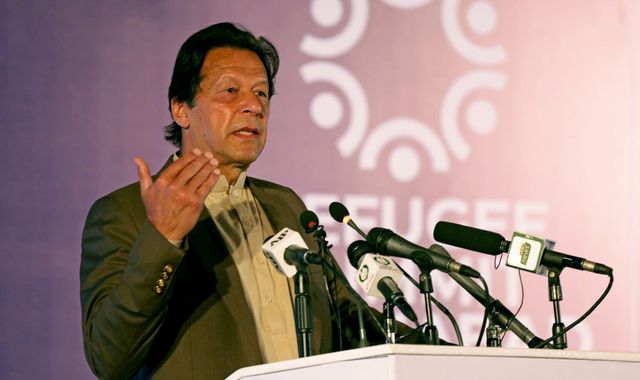 Pakistan's Prime Minister has controversially claimed the US "martyred" Osama bin Laden when they assassinated him in 2011.

Imran Khan hit out at Washington for not informing Pakistani officials before they raided bin Laden's Abottabad compound in the middle of the night nine years ago - despite them supporting the US in the war on terror.

In a rambling budget speech to parliament, he said: "We sided with the US in the war on terror but they came here and killed him, martyred him and ... used abusive language against us [and] did not inform us [of the raid], despite the fact that we lost 70,000 people in the war on terror."

The use of the word "martyr", usually reserved for heroes slain in battle, quickly drew criticism from opposition leaders.

He said: "He [bin Laden] ruined my country but he [Khan] is calling him a martyr."

Mr Khan also told parliament the Americans blamed Islamabad for failing to control the situation in neighbouring Afghanistan - using them as a scapegoat for their failure to defeat the Taliban despite having 150,000 US soldiers on the ground there.

Instead, the PM claimed, Pakistan faced "insults in return" and were "held responsible".

The White House has repeatedly accused Pakistan of harbouring the Afghan Taliban and giving safe haven to its affiliate Haqqani network, which has been blamed for several major attacks in Afghanistan in recent years.

Pakistan, Saudi Arabia and the United Arab Emirates (UAE) were the only countries who recognised the Taliban government in the run-up to 9/11.

But after the 2001 terror attacks, Pakistan turned and became a US ally, helping them oust the Taliban as part of a coalition in November 2011.

Since taking over as prime minister in August 2018, Mr Khan - a former cricket player - claims he has improved Pakistani-US relations by building a personal rapport with Donald Trump.

He said previously: "No one insults us now."