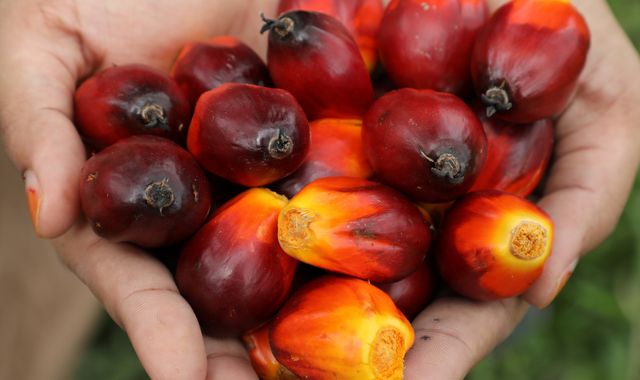 Malaysia has said it will promote a new slogan across the world to fight growing criticism about palm oil's negative impact on the environment.

The world's second largest producer and exporter of the oil said it is "committed" to an international campaign to counter ongoing concerns about the product.

The slogan - Palm oil is God's gift - has already been introduced by Malaysia at a national level.

Environmental groups say palm oil production is responsible for excessive deforestation, the killing of endangered animals and the destruction of wildlife habitats.

Last year, the EU decided to phase out palm-based transport fuels from its renewable energy sector by 2030 and is expected to set new food safety limits on refined vegetable oils.

Despite this, a minister for the Malaysian government, Willie Mongin, said: "The government is committed to marketing the new slogan locally and internationally."

The controversial product is a type of vegetable oil. It comes from palm oil fruit and is used in many food and household items available in the shops, such as cereals, chocolate, cleaning agents, toothpaste and shampoos.

Malaysia and Indonesia make up more than 85% of the world supply. There are 42 other countries which also produce palm oil.

Malaysia is expected to follow Indonesia in filing a World Trade Organisation suit against the EU over its ban on palm-based biofuel.

Palm oil is Malaysia's fourth major export product. The industry accounted for 4.4% of the country's total exports in the first half of this year.

According to the World Wide Fund for Nature (WWF), deforestation caused by the farming of products like palm oil is "destroying the habitat of already endangered species" and contributes to climate change by "throwing out millions of tonnes of greenhouse gases into the atmosphere".

The WWF says the oil "can be produced more sustainably and things can change".

In 2004, the Roundtable of Sustainable Palm Oil was formed and certifies an item depending on whether it has been produced according to a specific criteria.

It is made up of members from 94 countries and was set up amid growing concerns over the impact palm oil was having on the environment and animals.