Penguin colony numbers collapse, with climate change thought to be to blame 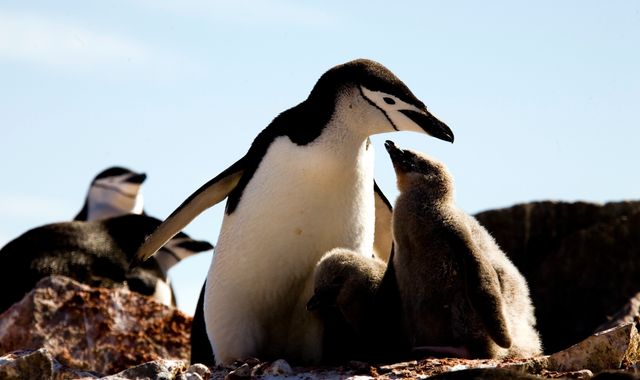 Numbers of one species of penguin have fallen by almost 60% in one of its most important breeding colonies, new research has found.

Breeding pairs of the chinstrap penguin on Elephant Island, north east of the Antarctic peninsula have decreased from 122,550 recorded in 1971 to just 52,786 today - with climate change thought to be behind the drop.

Reduced sea ice and warmer oceans is thought to have led to less krill, the small shrimp-like creatures that the penguins primarily feed on.

The latest survey was carried out by researchers from Stony Brook University and Northeastern University in the
US, in conjunction with a Greenpeace expedition to the region.

Dr Heather J Lynch, from Stony Brook University, said: "Such significant declines in penguin numbers suggest that the Southern Ocean's ecosystem has fundamentally changed in the last 50 years, and that the impacts of this are rippling up the food web to species like chinstrap penguins.

"While several factors may have a role to play, all the evidence we have points to climate change as being responsible for the changes we are seeing."

Louisa Casson, Greenpeace Oceans Campaigner, said: "Penguins are an iconic species but this new research shows how the climate emergency is decimating their numbers and having far-reaching impacts on wildlife in the most remote
corners of Earth.

"Governments must respond to the science and agree a strong Global Ocean Treaty at the United Nations this spring, that can create a network of ocean sanctuaries to protect marine life and help these creatures adapt to our rapidly changing climate."