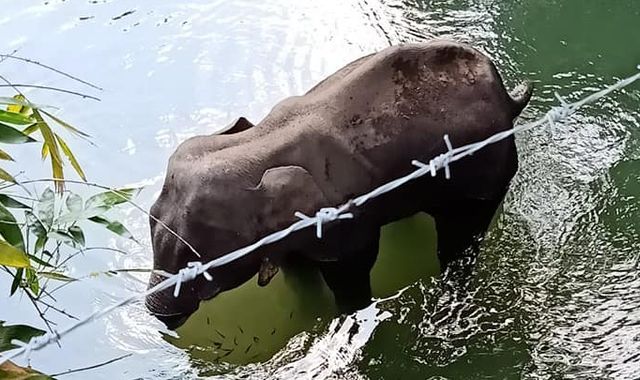 A pregnant elephant has died after eating a pineapple filled with firecrackers, Indian wildlife officers say.

An investigation has been launched after the elephant was found standing in water in Kerala's Silent Valley Forest on 27 May.

A spokesperson from Kerala Forest Department told Sky News that farmers put fireworks inside food and plant it on the edges of their fields to keep wild boars away.

The incident came to light when forest officer Mohan Krishnan, part of the team who attempted to rescue the animal, posted on Facebook.

"She trusted everyone. When the pineapple she ate exploded, she must have been shocked not thinking about herself, but about the child she was going to give birth to in 18 to 20 months," Mr Krishnan said.

The elephant's tongue and mouth were badly injured and she was unable to eat due to her injuries.

"She didn't harm a single human being even when she ran in searing pain in the streets of the village. She didn't crush a single home," Mr Krishnan added.

The elephant later walked to the Velliyar River and stood there with her head partially underwater.

The forest officer said two captive elephants were brought to lead her out of the river, but she would not move.

She died while still standing in the water.

The animal had wandered at least five or 10 kilometres from the forest in search of food, but it is not known where she ate the pineapple.

Officials took her back into the forest in a truck, where she was cremated.

Mr Sujit said a team from the Kerala Forest Department is investigating, and people are being questioned.

No arrests have been made so far, but they are hoping to have leads within the next 24 hours.

A tweet from the Kerala Forest Department said there is "no conclusive evidence that injury to lower jaw was caused by pineapple stuffed wd cracker" (sic).

"However this may be a possibility," it said.

The incident has been condemned by many on social media, and a Change.org petition calling for justice has been signed by 62,914 people.

It has also emerged that another female elephant died in similar circumstances in April in Kollam district.

The Kerala Forest Department spokesperson said: "It seems this elephant was very unfortunate and unlucky.

"In my 20 years of service I have heard of three such cases in the past with elephants. It is very sad and we are all very sad about it."