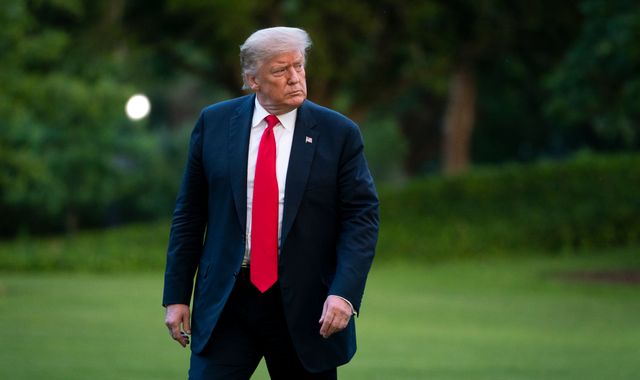 Iran has reportedly issued an arrest warrant for US President Donald Trump over the drone strike that killed a top Iranian general - and has asked Interpol to help detain him.

Mr Trump and more than 30 others have been accused of carrying out the attack on 3 January that killed General Qassem Soleimani.

But the US has called the move a "propaganda stunt".

The president faces no danger of arrest and it is unlikely Interpol would grant Iran's request as its guidelines forbid "any intervention or activities of a political" nature.

However, the charges underscore heightened tensions between Iran and the US since Mr Trump unilaterally withdrew America from Tehran's nuclear deal with world powers, including the UK.

Mr Alqasimehr was quoted as saying Iran requested a "red notice" for Mr Trump and the others, which represents the highest-level arrest requested by Interpol.

With "red notice alerts", local authorities arrest people on behalf of the country that requests it. The notices cannot force countries to arrest or extradite suspects, but can put government leaders on the spot and limit suspects' travel.

After receiving a request, Interpol meets and discusses whether or not to share the information with its member states.

US-Iranian tensions intensified when a US citizen was killed in a rocket attack blamed on Iranian-backed militia last December.

America retaliated by launching airstrikes in Iraq against the Kataib Hezbollah militia. It is part of a group officially recognised by the Iraqi government and which played a significant role in the fight against Islamic State.

The US raids triggered mass protests outside the American embassy in Baghdad and some demonstrators tried to storm the compound.

Mr Trump authorised the killing of General Soleimani while the military commander was on a visit to Baghdad on 3 January.

He had played a fundamental role in the development of Iranian proxy militias that killed and maimed many US and British forces in Iraq following the 2003 Iraq war.

But his death sparked outrage in pro-Iranian parts of the region.

Five days later, the Iranian regime responded by firing ballistic missiles against military bases in neighbouring Iraq, where US forces were housed.

No American personnel were killed and President Trump chose not to escalate the confrontation further, bringing the two countries away from the brink of all-out war.