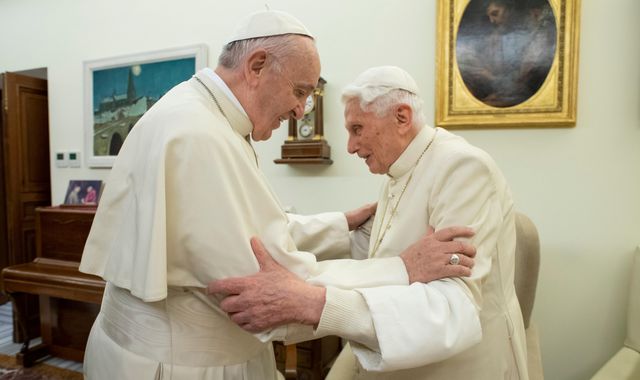 Retired Pope Benedict has warned his successor, Francis, not to relax the rules on priestly celibacy in an intervention described as a "serious breach" of Vatican protocol.

In a book co-written with a conservative cardinal, Benedict says celibacy has "great significance" because it allows a priest to concentrate on his vocation.

He adds that it "doesn't seem possible to realise both vocations (priesthood and marriage) simultaneously".

Benedict, 92, writes that marriage requires a man to give himself totally to his family, observing: "Since serving the Lord likewise requires the total gift of a man, it does not seem possible to carry on the two vocations simultaneously."

Pope Francis is being urged to consider allowing married men to become priests to combat a shortage in the Amazon region.

When Benedict resigned in 2013, he promised "unconditional reverence and obedience" to his successor.

Massimo Faggioli, a theologian at Villanova University in the US, tweeted: "Benedict XVI is really not breaking his silence because he (and his entourage) never felt bound to that promise. But this is a serious breach."

He added that "for some Catholics, Benedict XVI never retired really".

Celibacy became a tradition in the church about 1,000 years ago.

Relaxation of the rules in the Amazon, where Catholics can wait months for their next Mass, would apply to older men who are already deacons in the church, have a stable family life and have shown leadership in their communities.

The idea was put forward at an assembly of bishops in October. Francis is due to comment on the matter in the next few months.

When Benedict became the first pope to resign in 700 years, he said he would remain "hidden from the world".

But the 92-year-old has given interviews, written articles and contributed to books, and still lives within the Vatican walls.

The latest tome, called From the Depths of Our Hearts, has been written with Cardinal Robert Sarah, 74, a Guinean prelate who heads the Vatican's Congregation for Divine Worship and the Discipline of the Sacraments.

Excerpts from the book, due out on Monday, have been published on the website of French newspaper Le Figaro.

In a joint introduction, both men say they could not remain silent about the October synod.

Cardinal Sarah writes that making exceptions to the celibacy rule would be "a lie" that would set a dangerous precedent.