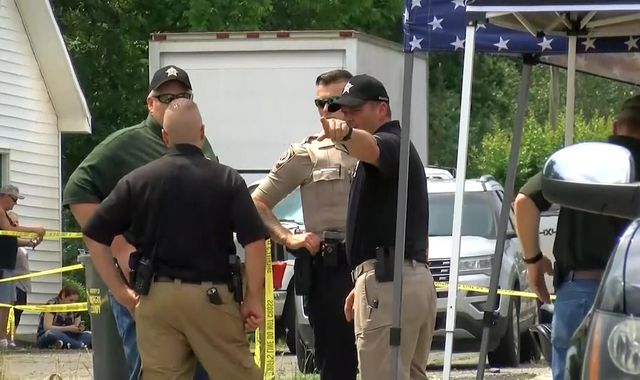 Seven people have been found shot dead inside a house in Alabama, police have said.

Officers responded to a call about a shooting in Talacuh Rd in Valhermoso Springs just before 11.30pm on Friday.

They arrived to find a blaze at the property which they quickly put out before firefighters arrived, and discovered the bodies of a girl, two women and four men in different areas of the house.

A dog was also found shot dead at the property.

Neighbours reportedly heard gunshots going off intermittently for an hour. Some of those killed were shot more than once.

Six of the seven victims have been named.

A 17-year-old girl is yet to be identified.

Mike Swafford, a spokesman for Morgan County Sheriff's Office, said the fire was near the bodies and may have been set in an attempt to destroy evidence.

"It is a horrific scene and to be able to process it will take some time," he told WAAY-TV.

"Investigators are following leads to piece together exactly what happened and who was involved.

"We can say we don't believe there is an active threat to anybody in the area."

Police officers are familiar with the residence, having answered several calls there in the past few years for issues including drugs, robbery, trespassing and disturbances, he told The Decatur Daily.

He said authorities are looking into the possibility of the killings being drug-related.

"Our theory right now is whoever did this, came in here for a reason, did it and left," he added.

Coroner Jeff Chunn said: "In my 37 years as a paramedic, deputy coroner and coroner, this is the most major crime scene in Morgan County."

(c) Sky News 2020: Seven people and a dog found shot dead inside a house in Alabama