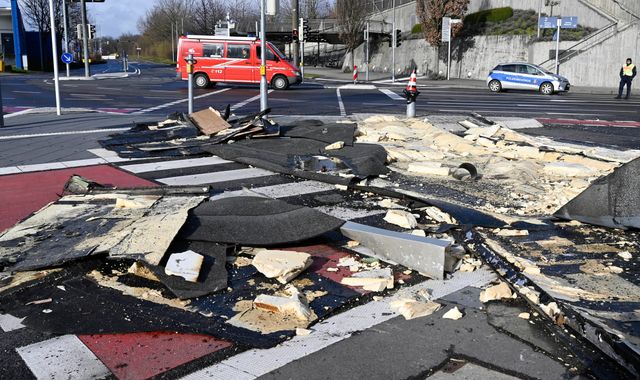 At least six people in mainland Europe have been killed since Storm Ciara moved away from the UK and Ireland.

Hurricane-force winds and heavy downpours have caused severe travel disruption and left tens of thousands of people without power as it moved eastwards across the continent.

In Poland, a woman and her 15-year-old daughter were killed when the roof of a ski rental equipment building was blown off and flew on to people who had gathered near a ski lift.

Three were injured in the incident in the mountain resort of Bukowina Tatrzanska, near the border with Slovakia.

In Sweden, a man drowned after his sailboat capsized on the southern lake of Fegen. The victim was washed ashore and later died - another person who was also in the vessel is reportedly missing.

In Germany, a driver died after his truck crashed into a trailer used by workers clearing storm debris from a highway in Hesse state.

And in the north of Slovenia, a man died when his car was hit by a falling tree.

Police in the Czech Republic said the storm was probably to blame for a car accident that killed the male driver and injured a female passenger. Investigators think a tree fell on the car, which skidded off the road and and overturned.

Five people were injured in the Czech Republic in storm-related incidents, including a woman who was taken to hospital after she was also struck by a tree.

Up to 290,000 people were left without electricity in the country.

And up to 130,000 homes were without electricity in large parts of France, stretching from Brittany through Normandy and other northern regions.

The storm is known as "Sabine" in Germany, where utility companies have been scrambling to restore power to 50,000 homes in northern Bavaria amid winds up to 100mph.

Train travel across the country was also severely disrupted, leaving many people unable to get to work. Airlines cancelled hundreds of flights from German airports.

The storm also led to school closures in several cities and regions, including Germany's North Rhine-Westphalia state, where several people were injured by falling branches and downed trees.

And part of a crane fell on to the roof of Frankfurt Cathedral overnight.